Dear Mr. Houston,
As a South Carolinian, can you give me a little help in the following matter?

I have decided to study the development of the negro cranium as a problem highly interesting not only to the anatomist but to the sociologist. If it seems feasable, I would regard this merely as a beginning of a more extensive study of hte racial anatomy of the negro which might be continued in our laboratory. Now the chief difficulty will be in the securing of proper specimens; embryos must be of pure strain and well preserved. Any physician nowadays can attend to the latter desideratum. The former requirement is very difficult to meet. No question should arise after the investigation is under way as to the purity of the material. I have thought of a number of possible sources, some of which cannot be utilized because of the publicity that might arise before the actual study had begun; - the problem, I believe, is worth something to the laboratory. I am getting in touch with friends in South Africa & have some expectation of success in that quarter. Now to the point, it occurred to me that the negroes in those islands off the coast of South Carolina, who work the cotton plantations, might be as much isolated as any accessible negro community in the world. I understand that on some of the islands they are of pure African blood. Now they must have medical care, and I see in some of their physicians a possibility of aid. Physicians everywere often come into possession in legitimate practice, of human embryos. This is the source of the large collections of human embryos at Harvard, Leipzig, Hopkins, etc. The doctors who look after those island negroes undoubtedly have specimens that they would be willing to contribute and could secure others. Can you help to get me in touch with someone who would aid me in the effort? I would very much appreciate it.

We have lived here in the country all summer despite the drought and have been rewarded in harvesting our first crop of Elberta peaches - not many but certainly delicious. 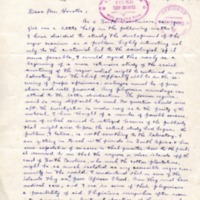