Just a few lines about that commission proposition. You are quite right, I did know about the expense of the outfit some time ago, but when I afterwards came to realize the possible chances of being stuck for a bunch of money and also took into consideration the fact that the war might be over very shortly (a thing which no one thought possible at the time I went into this proposition) I believed it best to stay remain an enlisted man. You see an officer in the Quartermaster Corps is very often a very hazardous position; you never know what sort of a job you are going to be put up against, possibly something you don’t know anything at all about, and you can consequently get yourself into a nice mess as a QM Officer is, of course, responsible for everything within his jurisdiction and in case of any loss or shortage is very often made to pay for it. Of course, I am not in this to make any money and but certainly do not want to loose any either. If it were a clear business proposition within a large enough salary attached to justify all the risks—well enough, but the salary of a second Lieutenant certainly does not justify one to run such risks. Of course, I acknowledge that there is some honor attached to a commission and also that others are made and get away with it. But then I know of some others who did not get away with it, in fact we have quite a long list in our office consisting of stoppages against officers for stuff or money not accounted for by them—one amount as high as $6000.—and that poor fellow can’t get out of the service until he pays up this $6000.—. So you see, a commission in the QMC is not all roses, and many refuse to take it on that account.

Nevertheless, I have left the whole matter in the hands of fate. I mentioned in my previous letter that I had withdrawn my name, but as I discovered a little later, that wasn’t quite right. I thought my Commanding Officer, upon my mentioning my request to him, could get my application back, but he advised me shortly afterwards that the papers had already been forwarded to Washington and, of course, I did not want to make any fuss about the matter in that place, so let things go as they are. Your letter telling me about the inquiries made about me at home confirmed all this and I would be very much interested to hear from you just what questions the young man asked. I would not at all be surprised if I the whole matter is held up indefinitely by the Department of Justice, (that’s the Dept. that young man came from, you know), the same as four others of fellows of German parentage are being held up ever since the end of September. They were also investigated at their homes and have heard nothing since. Well, at any rate, I will not be disappointed at all if they do not pass favorably on the matter. I know that my personal record as a citizen is O.K. and that’s enough for me.

Well, all I can do now is sit still and await developments.

Two or three of our men have been commissioned recently. One was sent to California, quite a nice trip by the way, and another New York man had the good fortune of being assigned to New York City. Of course, the latter case is one chance out of a hundred.

There is no doubt at all about the Dept. of Justice holding up my case for the time being as I was recommended by the Camp Quartermaster for a Training School and all the men so recommended, except myself, were ordered last Saturday by Washington, to Florida. 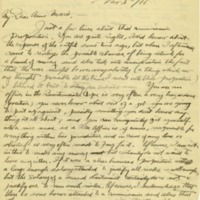