First of all I want to thank you most sincerely for your dear letter of the 31st of October which reached me a few days ago. I was, of course, especially anxious to hear about your trip to Bound Brook; I was glad to hear that you as well as father were able to go out there. Mrs. Franke wrote me an extremely nice letter last week; Yes, you are right, she certainly is a wonderful woman, an ideal mother and I certainly think a great deal of her.

Was very glad to hear that you as well as father and the children are well. I was rather worried about father’s cold but now see that he feels better again.

There always seems to be some dreadfull thing happening—now that Brighten Beach accident! That must have been a terrible affair! Did you know anyone concerned in it? Two names in the newspaper list seemed to familiar to me—a Palmedo, killed, and a Miss Hasty injured. Hope these are not the people known to us!

Well there is one bright ray now anyway,—peace does not seem to be so very far off anymore, in fact it would not surprise me a bit if all hostilities are over by the end of this month. Of course, that is only the very beginning of the end and it will be probably another six months at the very least before there will be any chance of getting into citizens clothes again. You see, the Q.M.C. is needed until practically everyone else has been discharged!

Our quarantine was raised last Saturday but I did not take advantage of it as I had to work all that afternoon as well as Sunday. Sunday morning I washed and ironed my clothes, have been doing this since the quarantine was established, and in the afternoon was on a hay unloading detail again as nearly a hundred cars of hay had arrived all at once and flooded that particular department. Well, it helps to pass the time, and I’m not anxious about visiting Spartanburg anyway,—there is absolutely nothing doing down there, the only advantage being that it affords a change of scenery.

I’m writing this in the office and am interrupted about every five minutes by some discharged drafted men coming along for their final pay before leaving for home. You see, the new draft has been arriving the last couple of weeks and is being put through a physical examination and those found unfit are kicked out, much to their delight, of course. Most of them come from Tennessee and they are, of most of them at least, a stupid looking bunch, some can’t write, and look as though this were the first time they are more than five miles from home, which no doubt is the case.

Sunday we had another throat culture taken to determine whether any of our men have any disease germs. To-day a bulletin with about 15 men on it was posted, ordering such men to an isolated camp as they were found to carry the germs. This is nothing to worry about, however; it is only a precautionary measure and shows that the Medical Department is still watching the ‘Flu’ situation closely.

Otherwise there is absolutely nothing new to write about.

With love to all,

P.S. We all had a chance to vote yesterday, and I took the opportunity to vote for Whitman - straight Republican ticket. Wonder how father voted? 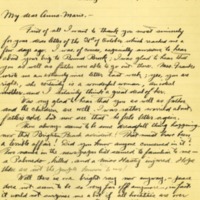