First of all I want to thank you very much for the nice wool socks you sent me; it was very good of you to think of me in this way. As we will still be in the service a good part of the winter at least, the socks will certainly come in very handy. I note that Miss Urchs knitted them and so I have written her a letter this evening.

I also enjoyed the box of candy from the kiddies very much and want to thank Rhoda and Pauly very much for same. I was very glad to hear that both the children as well as you and father are well.

I was very much surprised to receive a package of socks from Etta a few days ago; it certainly is very kind of her to think of me. I wrote her two days ago. Didn’t have much time to do any celebrating on my birthday as I was kept extremely busy the last days paying off discharged men. They are coming along in droves every day now and yesterday morning completely swamped me. We have only about 50% of the strength we ought to have in our department and I am further handicapped by having a brand new assistant. Was figuring so much during the last days that we had to take a rest yesterday afternoon and ordered the various organizations to hold up discharges until to-morrow morning. Guess we’ll have another stampede to-morrow, and suppose this will keep up for some time.

Since writing father last Friday, prospects have changed considerably, at least judging by the latest news which you may possibly have seen in the papers. Most of the men over here are to be discharged first, especially those in tent camps such as this one. Furthermore, orders have now been received to ship all supplies out of the camp, beginning to-morrow, so you see things are certainly stirring. It is therefore possible that we may get into civilian life again sooner than at first seemed likely, but I have an idea that we finance people might be sent to some port to assist in paying off the troops as they come over. Of course, no one knows anything definite as yet, but things do look more cheerful.I was very glad to get that letter from Gustav and to hear that he and his family are well. You will have noted that he has not heard from you in some time and has received no news from his brother either in several months. He asks me to let him know how his brother is, so if you will call him up and let me know if he has any message for Gustav I will be glad to forward it. You see, it may be that my letters have more luck in reaching him, seeing that he received my last one.I certainly do hope that Gustav will be able to come back to New York some time in the future although, judging by what he writes, that does not look very probable. I wonder how Karl and the other relatives are; I would give anything to get some news from them. Possibly there may be an oportunity soon?

I also want to thank you for your kind congratulations and the two letters of the 13th inst. You will see from what I wrote about the amount of work in our department that there isn’t very much hope for a furlough in the immediate future. We will have to await developments—as already intimated, it is possible that I may not be in this camp very much longer. The boys here seem to think everyone will be out of the camp within two months at the utmost. Wouldn’t it be great if my next station would be Hoboken?I nearly forgot to mention that the packages reached me a day before my birthday and your letters arrived just on the fifteenth!To get a change in scenery, I went to town with a friend last night. Had supper down there and then saw two movies. It has been raining quite some since yesterday and now promises to get much colder.

Recently heard that of the three first lieutenants of my old company, one was captured by Germans, another was killed and the third one is in an English Hospital. Father knows the one in the hospital—Arthur Guttzeit.

According to newspaper reports my old regiment was in the thick of the fighting and lost many men. I heard that Co. A was gassed and that most of the men are laid up in hospitals. They were the first to break through the Hindenburg line at a certain place and seem to have fared pretty badly!

Otherwise there is nothing new.

With love to you, father and the children, 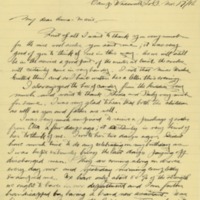