Received your long, dear letter last Saturday and want to thank you most sincerely for same.

Nothing particular has occurred down here since my last letter to father. Have been pretty busy lately, working all day on Decoration Day, and also most of the last two Sundays. Furthermore am now attending a QMC school, which started last week, from 6:30 pm to 8:30 pm every day except Saturdays & Sundays. It takes up all the subjects dealt with in this Corps and, I guess, will give one a pretty thorough knowledge of all the workings in this place, which are quite considerable. You see, the QMC has to attend to quite a lot of thing as paying the troops, giving transportation, both freight and passenger, issuing clothing, food, tents, etc. to the soldiers, repairing clothes and shoes, etc., and now we’ve even started a farm to produce food for the army. Furthermore there’s a big bakery attached which turns out between ten and twenty thousand loaves each day, and also a remount station which takes care of most of the horses and mules in the camp. So you can see, there’s quite a lot to learn in the school and most of my spare time is now taken up in studies. I find it high time that my brains are exercised a little again as they were getting very dull in this place which, as I already wrote you, gets very monotonous in time.

This detachment is growing right along, it’s now about three times as big as it was when I came over. Consequently we had to rearrange all our tents last Sunday, and it was quite a job to move about 50 tents; the job is about half done. We had a good Sunday dinner to make up for it: chicken and ice cream besides other things! The only trouble was that one couldn’t get a very large portion of either. However, one must be thankful for all good things.

The weather is not as hot anymore, quite agreeable except for some showers and nasty sand storms which cover up everything with a fine clay dust.

Recent newspaper reports state that the allies are at last making some advances, although not very big. I’m hoping they’ll keep it up,—the sooner they succeed the sooner the whole thing will be over.

In regard to father taking a vacation; I understand that he does intend to do so. He wrote me in his last letter to let him know when I could come up so that he could make his own arrangements accordingly. I will write him in my next letter to take a good long vacation, if possible. Of course I guess he couldn’t control entirely himself his time to begin in Jersey City, it seems from what father wrote that it was high time some one took a hand in affairs over there as they were rather negligent in some things. However there’s nothing to worry about, things will, no doubt, work out all right now. I am very sorry your summer plans have been upset but hope you will have a pleasant time out in the country and get a good rest. It certainly would be nice if you could get someone like Elisabeth to come out with you; no doubt she could help you a whole lot. Of course, the money proposition is a rather ticklish business, but then I suppose there is some way to decide the matter, she generally looks at things in a reasonable way, I think. Am anxious to hear about your further plans.

Now in regard to my furlough. Of course there is no telling as to what might happen in the future under present circumstances but I rather believe that the chances are that I will be right where I am now for some time to come. At any rate I hardly believe I could get a furlough before August and it is quite uncertain as to how long the QMC school will run. Therefore, I believe it best to make plans for some time after your return from the country, which would be after the middle of September? For instance, if I leave here on Friday evening, Sept. 27th that would get me home Saturday evening, Sept. 28th and then I would have to leave home Sunday morning Oct. 13th in order to arrive here Monday morning Oct. 14th. That would give you time to get settled after your return from the country and would also give me a chance to be home on father’s birthday. What do you think of that plan? Please let me know if that strikes you O.K. so that I can put in my application as soon as possible; there is always a long furlough list and notice, therefore, has to be given some time in advance.

Am glad to hear that the children are well again and hope they stay that way. No doubt Paul will soon have his vacation and will be promoted.

New York & especially Coney Island must look mighty peculiar with all lights out or all shades drawn. I guess there no there anymore who can’t realize that we’re at war! As far as German Airships over New York are concerned, I don’t believe for a minute that such a thing is possible. The submarines would have to be very near the coast to launch an airship and would run a great chance of being discovered by patrol boats while la assembling and launching an airship. Guess those are day dreams!

What you wrote about Otto Koechl interested me very much. What is Paul K. doing?

Supper is ready & I’ll have to close.

With lots of love to you, father & the kiddies. 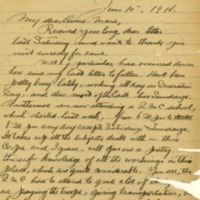