Many thanks for your long letter of the 18th inst. which arrived two days ago.I

was very sorry to hear that Rhoda took sick after all and it is too bad that you are having so much trouble at home. Paul, I note, is fortunately on the road to recovery again. I can certainly understand how busy you must be, especially with no help at all and am glad the time is soon coming when you will all move out to the country. When out there you must surely take everything as easy as possible, and get a good long rest. No doubt the change of air and surroundings will do you all a lot of good. I wish I could hope to be home again upon your return next Fall but that, I guess, is pretty nearly out of the question and so we must make the very best of circumstances. Better times will come again so we’ve got something to look forward to, anyhow. It is too bad that father still clings to his old habits in the evenings, I also thought he would now seek a little more company as he has so much time on his hands. No doubt he helps you a lot with the children, however, takes them for a walk once in a while? Well, the war can’t last forever and the time will come when we can have those nice comfortable evenings together again and once in a while see some movies or a show in New York. So don’t be too much discouraged, dear. And then it won’t be such a very long time anymore when the children are older and don’t tie you down so much as at present. You know how time flies!

Of course, at present one has to live rather economical on account of the high prices, etc., everyone has to do that and many people a good deal more than we, that can’t be helped in these times but all those things will readjust themselves after the war so, as I said before, that there’s lots of cheer in the thought that better times are coming.

Am sorry to note that you don’t like my looks without the camouflage, but for several reasons it’s best that I don’t wear any just now—looks foreign, etc. However, as you wish it I may possibly reconsider it when I get back to civilization.

Speaking about getting back into civilization, you know I was thinking one time of coming up north on a furlough this summer but of course there is no chance before August and possibly not even then. You know, I can’t control these things in the QMC as I could in my old company; I’m not so much on the ‘inside’ of things in this place and so privileges, etc. don’t come as easy. However, I have sort of reconsidered the furlough matter and now think it would be much better if I wait until you all return from the country next fall, in other words in October or November. You see I’ve got lots of country life down here now and guess I could get more out of it if I would spend it in the city; don’t you think so? I also expect that the RR rates for soldiers will be reduced by that time to about one cent per mile which would make a considerable saving. Let me know what you think about this matter.

Was glad to hear that you have no flies or mosquitoes as yet. It has been pretty warm here of late; mosquitoes have not appeared yet but flies are very plentiful and bothersome. We intend to screen in our tent as it is nearly impossible to lie down to read—the flies cover you up in no time. We have some fly swatters but that’s no good,—you might as well attempt to kill all the flies in the world.

4:P.M.
Just had our daily shower which generally comes sometime in the afternoon or evening. Seems like Texas where we had a daily shower during July & August. Guess it’s regular southern style. However it’s not nearly as muddy in this camp as it was in our border camp, so life is pleasanter here in the rain.

I’m writing this letter in the office, not because there isn’t anything to do but on account of the nature of the work. I’m still on a typewriting job, have been for the last three months, and no doubt will be as long as I’m in the QMC. The work gets so monotonous that a fellow has to stop every now and then and do something else, otherwise he’s apt to go nutty. They can’t change off the jobs in this department , as even though most of the men in here sit around doing nothing most of the time, because another fellow & I are the only ones who can typewrite and two typewriters are always needed. So you see, prospects are bright (?). However, there are plenty of jobs worse than this in the Army!

I received a letter from Mrs. Koechle in reply to the flowers. She has asked me very kindly whether I need any knitted articles and I shall write her very soon that I have plenty but appreciate the kind offer. When are they going out to Islip?

You say you would probably be better off living on the other side on account of high prices. I’m afraid, however, that after the war things will be entirely changed over there and taxes will no doubt be prohibitive. No, I don’t think life would will be pleasant on the other side for many years to come!

I wonder how Mr. Wiener is making out at present. I note you did not receive a check from him, but I didn’t know they had started paying dividends. If I can help you out on that Liberty Bond just let me know. It is peculiar that you didn’t hear from Liberty. Possibly they may have a better offer?

Am surprised in a way that father was so disappointed about the Lamp business; it’s too bad, of course, that he cannot start actively, but from a recent letter I understood him to say he was rather glad of the outcome at present as he enjoyed his vacation thoroughly. I do not understand why you should have your doubts about the place; of course it’s a business venture and the success of such ventures are never guaranteed but the other people have their money in it just as well as father and are no doubt just as anxious to see make a success of it. However, as long as they, I mean Mr. Kauffmann especially, does not think it advisable for father to start in now, I wouldn’t advise father to invest any more money in it now. But, of course, he is in closer touch with it than I am and therefore ought to be the best judge in the matter. I personally never like to interfere or rather express my views too much as it’s really none of my business and I don’t know how father takes it.

It is very good of you to offer to send me books but as we have a library right close by in our QMC YMCA we’ve really got more than enough to read. However, many thanks! We also have a central library about 15 minutes walk from here, up at Division Headquarters, and quite a fine selection of non-fiction as well as fiction is kept there. On my last visit to the Base Hospital last Tuesday which place is beyond the library, I dropped in there and picked up a most fascinating book “The Diplomatic Background of the War, 1870 to 1914”. Wish you could read it as it gives an extremely clear view of political conditions previous to the war. One of my tent mates, reading the title asked: “What war was that, from 1870 to 1914?!!” Guess that was funny, eh?

Speaking of my last visit to the Eye Clinic last Tuesday, well they gave me another exam, and the doc. said I was just on the border of being short sighted and that these pains were certainly caused by this condition, (hope he’s right), and he has ordered glasses. Gosh, I never did want to wear glasses but I couldn’t get out of it. Anyway, there only for reading & office work, so it isn’t so bad after all. Got them at cost price, $1 80 , pretty cheap; of course, the frame is anything extra but will do for this place. They will be delivered to me next week.

In reply to your question about sox, well I’ve got plenty of heavy woolen socks for winter or for marching in case I have to do any more marching, and I also have three pair of light socks which is quite sufficient. Whenever I wear a hole into a pair I simply throw them in and get a new pair from the Government at no cost to me. You see Uncle Sam takes good care of his soldiers.

In my last letter to father I wrote that I should like to have 2 pr. of pajamas and would ask you to send me two pr. of mine sometime when you get time. Please tell father that the box of cigars arrived several days ago in A1 condition. I will write him very soon. I expect that this box will last me quite a long time as I have cut down on my smoking considerably. I used to smoke from 3 to 5 per day and now smoke one cigar and one short, very small one, per day & guess it won’t do me any harm.

Please thank Paul for me for his nice drawings. He certainly has a wonderful imagination for his age. It was very nice of him to send me the pictures. Did he draw them in school?

Enclosed you will find a clipping from the Eagle about another robbery at Tiedemanns. They seem to have their troubles! Also a cartoon which ‘funny’ picture which I thought rather cute.

Recently read that Herbert Goepel has been drafted. You will remember he used to belong to our company but took his discharge a few days before we left for Texas in 1916 on account of business and the sickness of his father. Also read that Joe Bruckhansen has been drafted. His brother Walter was down here but has left for France. Guess you remember that tenth street family?

Guess that’s about all for to-day.

I do hope Rhoda is now well again.

Please give my love to father & the kiddies.

With lots of love. 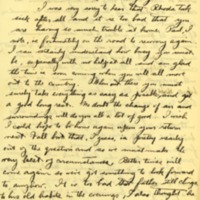