Your postal of June 29th reached me this afternoon and I was very glad to note that you all like your new country place very much. Many thanks for the postal. Judging from the picture the country around Liberty must be quite pretty. Will look forward to your letter with more details which you say you expected to send shortly.

Father wrote that you succeeded in getting a good girl and I hope she will stay with you a good long time. He also writes that he is fixed very comfortably at Mrs. Miller’s house, also that he expects to go to Lake George on the 15th or 20th of July but isn’t quite certain yet. No doubt he has written you about it.

Last week I handed in my application for a furlough for September 28th but it is still in the Captain’s basket. He said recently however that he could see no reason why it shouldn’t be granted but, of course, it’s quite a long time off and no one can tell for sure what may happen in the meantime. At any rate I will keep you advised. I do hope, however, that you are not planning to come home earlier on account of the furlough; I would rather postpone the date in case you would like to stay out in the country a longer time. Everything here is most likely to be just about the same for quite a while and so it will be just the same whether I make it in October or in September.

Nothing unusual has occurred in this place so I really cannot send you any interesting news. Have been quite busy recently on account of the closing of the month, but my work is just as uninteresting and monotonous as ever. In fact everyone is very much disgusted with things in the Finance Department. The word ‘Finance’ sounds very fine but most of the work is extremely dull—copying work, etc. The Captain doesn’t seem to take any interest at all in his men. The chief clerk, a civilian, is a most disagreeable sort of a chap. Well, there’s no use kicking, but if I see a good chance for a transfer somewhere’s else in the QMC. I will jump at it. However, there isn’t much chance of a transfer; the Colonel doesn’t generally approve them.

Have been drilling some negroes every morning last week, for about an hour each morning. That was rather interesting experience; the negroes down here, you know, are quite different from those up north. They are quite willing to learn and most of them fairly intelligent. Once in a while you come across one who is quite dense and then it’s some job to make those kind comprehend.

Prospects for an early peace are certainly not very bright and it looks as though the finish won’t come for another year or so. However, the sooner the better!

The camp will look comparatively deserted very soon as many of the organizations are beginning to move out. Some new recruits have arrived recently but the camp won’t be filled up again until the end of July at which time about 25,000 new recruits are expected, mostly from Pennsylvania.

The weather has been quite agreeable of late; generally one shower a day and not nearly as warm as I thought it would be. Of course, the best part of the summer is still ahead of us.

No doubt Friessens’ are now also out in the country?

Will write more another time.

Hoping you and the children are well and enjoying yourselves. 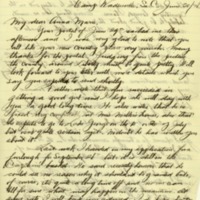