Many thanks for your letter of the 11th inst. which arrived yesterday. I was very glad to hear from you again but am extremely sorry that you are having so much trouble at home. It certainly does seem as though you had more than enough worries and I also am very sorry to hear that Pauly has to suffer so much. I do hope he will recover very soon and that Rhoda will not get the measles. No doubt it will not be very long before you leave the city and you will then, I hope, get more rest and the change of air will, no doubt, do the children lots of good. I see you possibly do intend to rent a cottage again, but wouldn’t you get more rest by going to some boarding house or hotel? There ought to be some place where you can get suitable food for the children but, of course, you can judge this better than I can. It does seem from your description that the place in Liberty is rather high at $2150.00 in comparison with the Lake George place at $200.00. Is that for three months?

In regard to father, I know he doesn’t express his opinions very often. He wrote me recently that you might possibly go to Liberty and that he would most likely go out there also for a time and that he also intended to go to Pearl Point for one or two weeks in case some of his friends also go up there. I think he is generally pretty easily satisfied and also think he would let you know in case he did not agree with your ideas. I know, of course, that it is pretty hard for you and it would certainly be lots easier if you could talk things over more but there seems to be no other way than to make your plans, submit them to father and, if he has states no other ideas or objections, go ahead with them. Father also wrote me that he may possibly go into the Lamp Co. anyway; no doubt he has told you about it, and that will, of course, affect his plans.

Was glad to hear that Norris’ were over to see you. I wrote Edythe some time ago but did not receive any reply.

Now you need not worry about my going over. It is true that the 27th Division is on it’s way, everyone up in N.Y. seems to know that, but as far as the Camp QM is concerned, I guess it’s quite certain that most of the fellows will stay right here not for some time. Most of the men don’t like that idea as it’s quite monotonous in this place and some have tried for transfers but they are generally turned down and so it seems that even if you want to get out of the QM it’s quite impossible. One of the fellows here has been trying to get over into the Infantry and has been thinking up all sorts of ways of getting the transfer but it’s no use and so you see there’s no cause for you’re worrying at all about me.

You write that Edna Warnecke was down here to see her fiancee, a Mr. von Goepen—Finance Dept. I do not know him, there is no such person in our Finance Dept. and I wonder what or where his Finance Dept. could be. To my knowledge, our’s is the only one here in camp.

The monotony of things has been broken up for me during the last few days. As I already wrote father, owing to a sort of neuralgic pain in my head, or rather face which bothered me for the last six weeks I went to our doctor. There is nothing serious about it, but I thought I might as well get rid of it, that’s what the Doctors are here for anyway. Well, so far the dentist has filled one tooth and bored two others, but he stated I’d better see the oculist, so up I went to the base hospital and underwent a thorough examination of ears, nose, and throat and eyes and was very satisfied to hear that there’s nothing wrong. You always wanted me to have my eyes examined and so now it’s done, and very thoroughly too! They put some stuff into them yesterday and I couldn’t read all day. Then they tried various lenses and next week they will give me another exam. and will then let me know whether I need glasses or not, but from what I gathered so far I guess I won’t need any. However, it’s some satisfaction to know that you’re all right in every way! Friday I have to visit the dentist again to get that job completed. I’ve been excused from duty for three days as they don’t want me to use my eyes too much just now.

There is nothing else to write about so guess I’ll close. Did you see the photo I sent father? Some wild crowd.

Please give my love to father, Pauly & Rhoda.

Hoping that the children will soon be well again & with love to you. 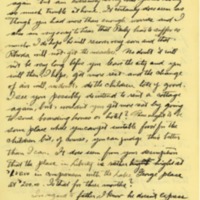