Just a few lines to thank you for your card of the 29th and also for the program which arrived this morning. Was very glad to hear from you and the program interested me very much. It certainly would be great if they brought “The Hearts of the World” down here, but it generally takes 2 years at least before such features reach this one-horse town. The other night we had some movies in the YMCA which were produced eight years ago! and they certainly were rotten. Next Sunday they will give “Les Miserables” in the YMCA, you know, that’s the one we saw several years ago on Broadway. Last week “The Birth of a Nation” was in town and if you haven’t seen it would advise you to do so as it’s the best movie I ever saw. I saw it some time ago, not in town, in fact I haven’t been in town for nearly three weeks—got tired of the place.

Things are humming here at present, the Division is on the move at last. This, however, does not affect me. The other night I visited my old company to say good-bye and it’s only a matter of a couple of days for them. The boys are mighty glad to get away from this place and I confess I was a little bit sorry that I’m not with them anymore, especially as I’m also absolutely sick and tired of the monotony in this place and particularly in my department. However, got to make the best of it, there’s no use kicking, and the prospects are that we’ll be here a good long time yet. I’m perfectly well and happy otherwise and hope all at home are likewise. Nearly had a chance of going over with the Division anyway as there was a call for men for the Intelligence and Translator’s Department but they required French as well as German so it was only ‘nearly’. Would have been a mighty interesting job, however.

It’s been mighty cool here lately, in fact we sometimes have a fire in our tent. Some of the men removed their stoves for the summer but luckily we kept ours. Funny weather for the South! Had quite some rain too.

Will be very interested to hear from Father about his plans and also about your plans for the summer. In case father does decide to go into the Lamp Business actively, I hope he will take a few months vacation beforehand.

Just had quite an interesting conversation with on of General Pershing’s old soldiers. He was with Pershing in Mexico while we were down at the Border. I was surprised to hear that the climate or rather temperature in Mexico, at least in the places they were, was a good deal more agreeable than the kind we had. This man has been in the Army since 1897! Guess he’s more stuck on it than I am!

In case you see Uncle Gus please tell him that I haven’t forgotten those miniature cotton bales he wanted but haven’t been able to get any yet, not having been in town. No doubt will get there pretty soon, however.

Glad to hear that Mr Berendts and Bartels came around. How do you like them? Personally, I don’t know them, never having met the former and only having seen the latter once in Bound Brook. Didn’t get to talk with him at that time very much; seemed to me he didn’t like the uniform I had on!

Please don’t forget to send me Gustav Elsner’s address as I may yet get to write him a few lines.

With love to you, Father & the children,

P.S. Please tell Father that I thank him for the cigars which recently arrived in A1 condition. Will write him very soon. 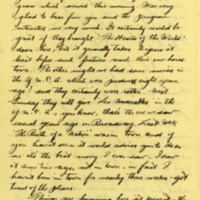