Committee of the First Congregational Church of Atlanta asks that lynching be made a federal crime.

That is the American habit of lynching. We appreciate the fact sometime ago you addressed a letter to the country on this matter which went to the heart of the situation. As a result, there was at first a lull in this evil work; but recent statistics, which you no doubt have at hand, show that the lynchings of last year were more than those of the previous year.

Only last week a man was burned alive at the stake in Texas in broad open daylight. We do not make this appeal because this last victim was a colored man; but the fact that he was colored adds to the enormity of the offense in view of the fact that he belonged to a defenseless group. The act was a peculiar violation of the spirit of democracy.

In view of the fact that individual States have shown themselves incompetent to deal with this evil, and that your noble appeal has gone unheeded, we ask you to use your great influence to have lynching made a federal crime, and thus bring to bear upon the mob the strong arm of the nation.

Henceforth, whether we will it or not, the American democracy will be taken as a model for the world. Can we afford in this hour to fail in the protection of the lives of our own citizens? As never before are we not on trial before the world? A nation that cannot protect its own is weak! If it will not, is it not wicked?

We are not making this plea merely because we are colored men and women, nor because this evil bears most heavily upon the colored people of America. Nor should we be thought in the making of this to condone any crime in any man or woman of whatever race. We are making this plea because we are loyal Americans and desire the best things for the American democracy. Our record at home and across the seas in the world conflict now happily ended testify to our sincerity. 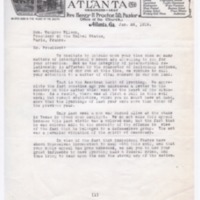