I would be very much obliged if you would have the following cable sent to Mr. House in Paris, in the code which the Department has been using in communicating with him:

“It seems to me that we are justified in insisting on five delegates. It would be extremely embarrassing to us to have fewer than five. I do not understand that any government can be arbitrarily limited, except by agreement. I think also with you that we are entirely justified in insisting upon the English language being officially sanctioned and used at the conference as well as French. The limitation to French would greatly embarrass us, if only in the matter of constant translation, for which we haven’t a suitable confidential force. You will remember that English is the diplomatic language of the Pacific. I would be very much obliged if you would cable whether it would be necessary or wise for us to bring any domestic servants with us. We are exceedingly distressed by the news of your illness and beg that you will take extra good care of yourself. We all unite in affectionate messages.”


Hon. Frank L. Polk,
Counselor of the Department of State. 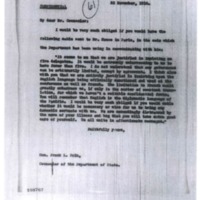