Explaining that a Supreme Court case prevents the Department of Justice from taking any action in the matter of lynching and mob violence.

Your letter of the 10th instant to the President of the United States, relative to the lynching of negroes by mobs in the several States, has been referred to this Department. Many such complaints are referred here, but the obstacle which prevents this Department from taking any action in regard to the matter is that the Supreme Court of the United States in the case of Hodges v. United States, 203 U. S. 1, held that the Federal Government had no power under the Constitution to interfere in the protection of the fundamental rights of citizens of the several States. The court held that the matter was purely one for State control, but that Federal control over it was not justified by the Constitution of the United States. 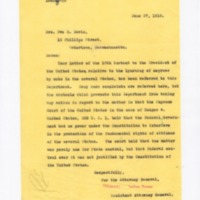