Requesting that the same protection given to whites by law and trial be given to African Americans of the South.

To the President of the United States of America -
Woodrow Wilson -

The frequent occurrince of lynchings of the negro citizens of the Southern States with no effort put forth by those in authority to punish the parties committing such barbarous crime has brought very strong protest from the women of the Methodist Church in the State of Massachusetts represented by the New England Conference Woman's Home Missionary Society of the Methodist Episcopal Church.

The recent account May 20th in the Boston Post of a Valdosta, Ga. Mob hanging a Negro and Wife May 16th and lynching two other negros May 17 for the same crime shows little "law" or "justice" in the United States of America at this time when these virtues are being so loudly proclaimed.

The women of the W.H.M.S. make the request that the same protection by law and trial be granted the negro of the South as is allowed the white man and that those who participate in lynchings shall be taken by federal officers and punished as other murderers. 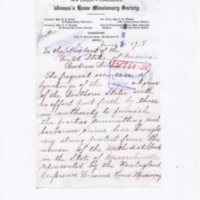