Acting Secretary to Judge Edward Osgood Brown acknowledging the receipt of his letter and confirming that there is no segregation policy in effect at the Department.

Receipt is acknowledged of your letter of September 12, conveying the protest of the Chicago Branch of the National Association for the Advancement of Colored People against the adoption or extension of a segregation policy in the treatment of United States Civil Service appointees.

I have to advise you that no segregation policy is in force in this Department and no complaints of discrimination among employees have come to my attention. 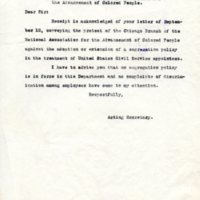