Brief finding aid for a small personal collection of a WWI soldier.

Thomas Jefferson Koger lived from 1895-1987. He served in World War One as a member of the Rainbow Division, or the 42nd division.

Each item was placed into an individual folder and put in chronological order in a Hollinger box.. No discernible order found among the 12 original items. 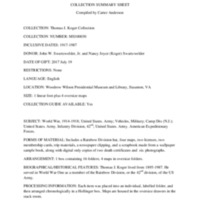