37 folders, all contents are arranged chronologically with any undated materials at the back of the folders.

Edith Bolling Wilson was born in Wytheville, Virginia, on 1872 October 15. Educated primarily at home and briefly at boarding schools, Edith traveled to Washington, D.C., to visit her sister in 1889, and there met her first husband, Norman Galt. After a four year courtship, the couple was married in 1896 and had one child who died soon after birth. When Galt died in 1908, Edith, now a wealthy widow, successfully ran the family jewelry business. Introduced to Woodrow Wilson’s cousin, Helen Woodrow Bones, Edith met the recently widowed President at the White House. They were married privately at Edith’s house on 18 December 1915. A devoted wife, Edith traveled with her husband on speaking and campaign tours and encouraged and took part in his recreation and exercise, including golf, motor rides, the theater, and time with his family. She was deeply involved in the daily routine of the White House, discussing state papers with Wilson and decoding messages for him. After serving as a Red Cross volunteer during World War I, Edith accompanied her husband to Paris for the Peace Conference in 1918 and 1919. Following Wilson’s stroke after a Western speaking tour promoting the League of Nations, Edith cared for her husband, denying access to some advisors and officials, which resulted in charges then and today that she had usurped power. After leaving the White House, Edith cared for her husband at their home on S Street in Washington until his death in 1924. For the rest of her life, Edith protected Wilson’s legacy and helped to establish the Woodrow Wilson Birthplace Foundation as a shrine to her deceased husband. She wrote My Memoir in 1938, aided Wilson’s biographer, Ray Stannard Baker, and remained active in Democratic politics. She died at her home in Washington, DC on her husband’s birthday, 28 1961 December 28. 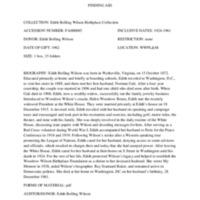