Herbert Hoover asks Woodrow Wilson to consider removing blocks to Mexican laborers from crossing the border to work on farms and thus solving the problem of agricultural labor shortage in stages bordering Mexico.

As you are aware, there is considerable shortage of labour in many agricultural sections and among these are the states bordering on Mexico. This situation has been partly created by the fear of Mexicans that they might be subject to the draft and their exodus from the country. On the other hand, with the growing shortage of food in Mexico, there will be a very distinct pressure towards returning to the United States but the return of this labour is as greatly impeded by both the head tax of Eight Dollars and the necessity of obtaining an American passport, costing Two Dollars.

We have received representations from many quarters that if these two disabilities could be removed from Mexican labour we would have a considerable influx and that the situation in all of this territory might be greatly relieved.

I am wondering if you could consider the problem and, if you think it advisable, ask the Secretary of Labour and the Department of State if they could make such arrangements as would bring about this solution. 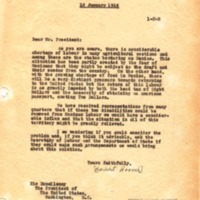