In reference to the letter from Mr. Reid, Herbert Hoover tells Tumulty that he would prefer such organizations to support food conservation efforts by excluding items from their menus that they are trying to save.

In regard to letter from Mr. Reid on character of banquets.

I have continually refrained from preaching to the American people, except on the one text, and that is to save food, as I do not consider it part of my job to be a gloom aertist. It is my impression that if all of this sort of organizations would exclude from their menus the foodstuffs that we are endeavoring to save, and if they would limit their menus to three or four course, they would be doing a National service. Certainly, simplicity of living is not abstination and is necessary for the successful conduct of the War, in addition to the emphasis we try to lay on the saving of certain commodities. 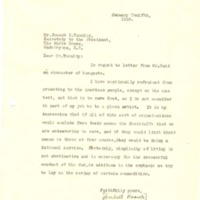