Italians are seeking to maintain control of Fiume.

Urgent. Number 287. November 26th. Confidential. For the Secretary of War and Chief of Staff.

Admiral Benson handed me today two dispatches received by him yesterday from Rear Admiral Bullard the American Naval representative in the Adriatic Sea. First dispatch follows: “Have received report that Italian authorities have ordered two companies American troops to Cettige. This does not seem provided for in the armistice. Army officials apparently have not proper instructions and are dominated by Italians. Italian troops formerly sent there were ordered back by Servians. It is possible there may be clashes if terms of armistice are not rigidly followed.”

Second dispatch follows: “Confidential report my representative Fiume indicates Italian authorities have gone much further than necessary preserving life and property or that demanded by the terms of armistice and Fiume has appearance permanent Italian occupation. It is my judgment that unless Fiume can be placed under real allied control it will be difficult to preserve peace and order. It appears American troops are being used to promote rather than curb Italian activities and our army representative probably has not definite instructions. French support proposition of making Fiume base for French evacuating troops operating Servia which further reason why Fiume should be under allied control and not simply Italian.”

It seems to me that there is danger, at this juncture, in leaving small American detachments remote from the control of the American supreme command. 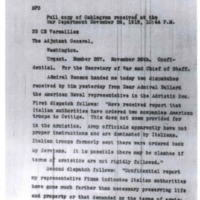