New leader of Austria is a German Socialist and a great admirer of Woodrow Wilson.

The following information may be of use to the United States Government in its dealings with Austria.

According to newspaper reports, Dr. Victor Adler is foreign minister of the new state set up in the German portions of Austria.

Victor Adler was, and is probably now, a great admirer of President Wilson. When Mr. Wilson was elected President for the first time, Dr. Victor Adler published in his paper, the Vienna Arbeiter-Zeitung, for which newspaper I was then staff correspondent in London, many articles praising the new president of the United States.

Victor Adler is a man of great diplomatic tact. He occupied a unique position in the German Socialist movement. He acted as moderator in the many quarrels which sprung up in the Socialist party of Germany during the last twenty years. His influence on the Socialists of the German Empire used to be paramount.

His paper, the Vienna Arbeiter-Zeitung, was widely read in Germany, not only by Socialists, but by all kinds of liberals. It was exceedingly well edited, quite different from the ordinary loquacious Vienna sheet.

Dr. Victor Adler, who is a physician by profession, started his political career as a German nationalist. But he developed into a very broad-minded man and, I think, has always been on good terms with the leaders of the other nationalities in Austria-Hungary.

I hope you will be able to make some use of this information. 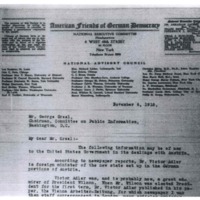