Representatives of the Negro Press

Address to the Committee on Public Information with suggested action steps and listing names of all in attendance at conference.

ADDRESS TO THE COMMITTEE ON PUBLIC INFORMATION.

We, the thirty-one representatives of the Negro press, which has a circulation of more than a million copies, principally among the colored people of America, and representatives of other racial activities, wish to affirm, first of all, our unalterable belief that the defeat of the German government and what it today represents, is of paramount importance to the welfare of the world in general, and to our people in particular.

We deem it hardly necessary, in view of the untarnished record of Negro Americans, to reaffirm our loyalty to Our Country and our readiness to make every sacrifice to win this war. We wish, however, as students and guides of public opinion among our people, to use our every endeavor to keep these 12,000,000 people at the highest pitch, not simply of passive loyalty, but of active, enthusiastic and self-sacrificing participation in the war.

We are not unmindful of the recognition of our American citizenship in the draft, of the appointment of colored officers, of the designation of colored advisers to the Government Departments, and of other indications of a broadened public opinion; nevertheless, we believe today that justifiable grievances of the colored people are producing, not disloyalty, but an amount of unrest and bitterness which even the best efforts of their leaders may not be able always to guide, unless they can have the active and sympathetic co-operation of the National and State governments. German propaganda among us is powerless, but the apparent indifference of our own Government may be dangerous.

First and foremost among these grievances is LYNCHING. Since the entrance of the United states in this war, seventy-one (71) Negroes have been lynched, including four (4) women, and one hundred and seventy-eight (178) have been victims of mob violence. The atrocities committed by American mobs during this time have been among the worst known to civilized life, and yet not a single person has been punished for lynching a Negro, nor have white mob leaders anywhere been brought to adequate justice.

The effect of these facts upon the Negro people has been indescribably depressing, and we earnestly believe, and growing white southern opinion is coming to believe, that Federal intervention to suppress lynching is imperative. We urge a strong, clear word on lynching from the President of the United States, and then such legislation by Congress as will enable the Federal Government to go to the limit of the Constitution, under its war powers and under its other powers, to stamp out this custom, which is not only holding our Nation up to just criticism, but is seriously affecting the morale of 12,000,000 Americans.

SECONDLY: When American Negroes patriotically offer their services to help win this war, these services are too often refused, or accepted with reluctance, or with disconcerting discrimination. The Nation, for instance, has asked for Physicians and Red Cross Nurses, but still refuses to employ three thousand (3,000) colored nurses, and has accepted only a few colored physicians; the Civil Service officials are advertising for skilled workers and for stenographers and clerks, but the successful colored applicants are repeatedly refused appointment on the ground that they are colored; no colored man today can serve in the Navy as an able seaman, while in the Army, difficulties are put before colored men and officers who seek training and promotion.

If the Nation wants our help, our help has been and will be offered, but what shall we say or think when aid is refused?

FINALLY: Attention is called to the conditions of travel among colored people. The railroads are now under United States control. Colored people, just as their white fellows, are moving here and there, as soldiers and workers. They feel, therefore, with special keenness, the injustice of first-class fares and third-class accommodations and frequent other embarrassing circumstances.

These are the pressing grievances which today are stirring our people. The American Negro does not expect to have the whole Negro problem settled immediately; he is not seeking to hold-up a striving country and a distracted world by pushing irrelevant personal grievances as a price of loyalty; he is not disposed to catalogue in tremendous crisis all his complaints and disabilities; he is more than willing to do his full share in helping to win the war for democracy, and he expects his full share of the fruits thereof; but he is compelled today to ask for that minimum of consideration which will enable him to be an efficient fighter for victory, namely:
(1) Better conditions of public travel;
(2) The acceptance of help where help is needed, regardless of the color of the helper;
(3) The immediate suppression of lynching.

All these things are matters not simply of justice, but of national and group efficiency. They are actions designed to still the natural unrest and apprehension among one-eighth of our citizens, so as to enable them whole-heartedly and unselfishly to throw their every ounce of effort into this mighty and righteous war.

A BILL OF PARTICULARS ON WHICH, IT IS SUGGESTED, ACTION MIGHT BE TAKEN.

(1) National legislation on lynching.
(2) Colored Red Cross nurses.
(3) Colored able seamen.
(4) Colored volunteer soldiers to the extent of their volunteering.
(5) Colored physicians for colored troops.
(6) Training of larger numbers of colored officers.
(7) Unlimited promotion of colored officers according to proven efficiency.
(8) Utilizing the services of Colonel Charles Young (Retired).
(9) An attempt to equalize among black and white troops the proportion of draftees assigned to Stevedore regiments, service battalions, etc.
(10) Systematic getting and dissemination of news of Negro troops, at home and abroad.
(11) Systematic attempt to correct ridicule and misrepresentation of the Negro and omissions of his achievements in the white press.
(12) The consideration of a Government loan to the Negro Republic of Liberia, now actively aligned with the Allies.
(13) Executive clemency for the Negro soldiers recently tried and sentenced at Fort Sam Houston, Texas.
(14) Conditions of travel among colored people.

Adopted at the recent Conference of Negro Editors and Other Leaders of Thought and Opinion Among Colored Americans, held under the auspices of the Committee on Public Information and the War Department, at Room 112, Interior Department Building, Washington, D. C., Wednesday, Thursday and Friday, June 19, 20 and 21, 1918.

We desire to express to the Secretary of War our sincere appreciation of the appointment of the Honorable Emmett J. Scott as a Special Assistant in the War Department at Washington, D. C.

And to record our full confidence in Mr. Scott's ability to serve efficiently, wisely and loyally Our Country in this great crisis.

And to urge the favorable consideration of the enlarging Mr. Scott's office so that it may become a channel for such complaints and suggestions that may arise from time to time affecting the colored troops and the interests of our people in general.

N. B.--By special motion, unanimously carried, the names of all the Editors and others present were ordered appended to the summarized statement and resolutions of the Conference. 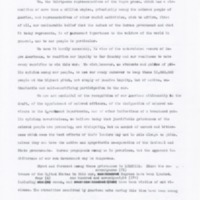