Memo that came out of the convention of African American editors asking for an end to lynching, and listing other grievances.

The representatives of __ periodicals with a circulation of __/, presumably the colored people of America, wish to affirm first, of all their unalterable belief that the defeat of the German Government and what it today represents is of paramount importance to the welfare of the world in general and to their people in particular.

They deem it hardly necessary in view of the untarnished record of Negro Americans to reaffirm their loyalty to their country and their readiness to make every sacrifice to win this war. They must, however, as students and guides of public opinion among their people use their every endeavor to keep these 12,000,000 people at the highest pitch, not simply of passive loyalty, but of active, enthusiastic and self-sacrificing participation in the war.

They believe today that three justifiable grievances of the colored people are producing not disloyalty, but an amount of unrest and bitterness which even the best efforts of their leaders may not be able to guide unless they can have the active and sympathetic cooperation of the National and State Government.

First and foremost among these grievances is - LYNCHING. Since the entrance of the United States in this war, __ Negroes have been lynched, including __ women, and have been victims of mob violence. The atrocities committed by mobs have been the worst known to civilized life, and yet, NOT A SINGLE PERSON HAS BEEN PUNISHED FOR LYNCHING A NEGRO, nor have mob leaders anywhere been brought to justice.

The effect of these facts upon the Negro people has been indescribably depressing, and we earnestly believe that Federal intervention to suppress LYNCHING is imperative. We urge a strong, clear word on the lynching of Negroes from the President of the United States, and then such legislation by Congress as will enable the Federal Government to go to the limit of its constitutional rights under its war powers and under its other powers to stamp out this custom which is not only holding our Nation up to just criticism, but is seriously weakening the morale of 12,000,000 Americans.

Secondly, - When American Negroes patriotically offer their services to help win the war, these services are too often refused or accepted with reluctance or with discrimination. The nation, for instance, has asked for Red Cross Nurses, but is still refusing to employ 3000 colored nurses; the Civil Service Commission is anxious for the employment of stenographers and clerks, but successful colored applicants are repeatedly refused appointment on the ground that they are colored; no colored men today can enlist in the Navy as able bodied seamen but only as a servant - while in the Army, repeatedly difficulties are put before colored men and officers who seek promotion.

If the Nation wants our help, our help has been and will be offered, but what shall we say or think when NEEDED AID IS REFUSED?

Finally, attention is called to conditions of travel among colored people. The railroads are now under United States control. Colored people, just as their white fellows, are moving here and there, as soldiers, as workers. They feel therefore with special keeness the unjust FIRST-CLASS FARES and THIRD CLASS ACCOMODATION and frequent refusal of Pullman accomodation.

These are the pressing grievances that today are stirring our people; the American Negro does not expect to have the Negro problem settled immediately; he is not seeking to hold up a striving country and a depressed world by pushing unwarranted grievances as a price of loyalty; he is not disposed to catalogue in this crisis all his complaints and disabilities; he is more than willing to wait until the war on democracy is triumphantly ended before asking for his full and just share of that democracy; - BUT, he is today compelled to ask for that minimum of consideration which will enable him to be an efficient worker in this war, namely: - 1. THE IMMEDIATE SUPPRESSION OF LAWLESS LYNCHING---(2) THE ACCEPTANCE OF NEGRO HELP IN THE RED CROSS, NAVY and CIVIL SERVICE---(3) JUST PROMOTIONS IN THE ARMY---(4) BETTER CONDITIONS OF TRAVEL.

All these things are matters not simply of justice or of National and group efficiency. Action designed to still the natural unrest and apprehensions among 12,000,000 Americans so as to enable them whole-souled and unselfishly throw their ounce of effort into this mighty and righteous war is asked. 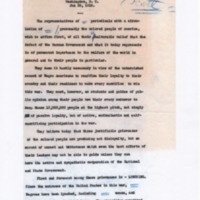