Colored Editors and Leaders at Conference

Colored Editors and Leaders at Conference

Emmett Scott sends the News Report regarding the convention of African American editors to Carl Byoir.

Colored Editors and Leaders in Conference

By the authority and direction of the War Department and the Committee on Public Information, Emmett J. Scott, Special Assistant to the Secretary of War, called to Washington this week for a conference, thirty or forty representatives of important colored newspapers of the country, together with a number of the leaders of thought and opinion among the Negro people, to consider methods by which the millions of colored people of the nation may best assist in the winning of the war.

PROCEEDINGS MARKED BY DIGNITY AND UNITY

The conference formally opened Wednesday morning, June 19, in the main auditorium of the new building of the Department of the Interior, 18th and F Streets northwest, at 10:30 o’clock, and continued throughout Thursday and Friday, June 20 and 21.

Mr. Scott presided at all of the sessions which were marked by an earnestness of purpose, a broad grasp of the questions at issue, and an unwavering loyalty to the flag of the nation, as well as by an intense devotion to the highest interests of the colored Americans for whom they came primarily to speak.

The discussion covered a wide range, and the conferees were given an opportunity to present their views, reflecting the state of mind of the colored people of the country, with the utmost freedom and frankness, unhampered by parliamentary restrictions or any effort to direct opinion in any particular channel- save that of utilizing in the most effective manner every resource at the command of the race to bring its victory to the American arms in its present struggle for liberty and world-wide democracy. Mr. Scott’s admirably-tempered addresses at various stages of the deliberations repeatedly admonished the conferees to voice their sentiments fully and fearlessly, laying all grievances and suggestions for their redress upon the common altar, with the view of strengthening where needed the patriotism and morale of the Negro people. So fair and impartial were the rulings of the chair upon every point raised or principle enunciated, that at no time was a single exception taken to them. Every conceivable shade of individual opinion was represented in the body, but there was from the outset a firm disposition to subordinate private and personal considerations to the general good, without regard to politics, creed, faction, or section. This lofty aim was adhered to most religiously. Dignity of statement, harmony of thought and unity of action were the predominating features of the three day’s session. The document, reported by the special committee appointed to summarize the expression of the conference as to the best plans for the mobilization of the resources of the 12,000,000 Negroes of the Republic in support of the war aims of the government, was adopted by a unanimous vote, given heartily and enthusiastically. “America” was sung with fervor and unction as final adjournment was taken.

PERSONNEL OF THE CONFERENCE

The following gentlemen were invited to be present at the conference:

The following is extract from the Resolutions adopted by the confrerence:

“We, the thirty-one representatives of the Negro press which has a circulation of more than a million copies, principally among the colored people of America, and representatives of other activities, wish to affirm first of all, OUR UNALTERABLE BELIEF THAT THE DEFEAT OF THE GERMAN GOVERNMENR AND WHAT IT TODAY REPRESENTS IS OF PARAMOUNT IMPORTANCE TO THE WELFARE OF THE WORLD IN GENERAL AND TO OUR PEOPLE IN PARTICULAR.

“We deem it hardly necessary, in view of the untarnished record of Negro Americans, to reaffirm our loyalty to Our Country and our readiness to make every sacrifice to win this war. We wish, however, as students and guides of public opinion among our people, to use our every endeavor to keep these 12,000,000 people at the highest pitch, not simply of passive loyalty, but of active, enthusiastic an self-sacrificing participation in the war.

“We are not unmindful of the recognition of our American citizenship in the draft, of the appointment of colored officers, of the designation of colored advisors to the Government departments, and to other indications of a broadened public opinion, nevertheless we believe today that justifiable grievances of the colored people are producing not disloyalty, but an amount of unrest and bitterness which even the best efforts of their leaders may not be able always to guide unless they can have the active and sympathetic cooperation of the National and State governments. German propaganda among us is powerless, but the apparent indifference of our own Government may be dangerous. ***

“The American Negro does not expect to have the whole Negro problem settled immediately; he is not seeking to hold-up a striving country and a distracted world by pushing irrelevant personal grievances as a price of loyalty; he is not disposed to catalogue, in this tremendous crisis, all his complaints and disabilities; he is more than willing to do his share for the fruits thereof- but he is today compelled to ask for that minimum of consideration which will enable him to be an efficient fighter for VICTORY.”

To enliven the occasion for the distinguished visitors a local committee of citizens provided a series of entertainments, which included among other interesting things, a theater party of fifty at the Howard Theater, Wednesday evening to witness the presentation of “The Divorce Question” by the Quality Amusement Company, of New York City; a smoker and luncheon on Thursday evening in the assembly room of the 12th Street Y.M.C.A., with Attorney W. L. Houston as toastmaster; and a tour of the city Friday afternoon in sight-seeing automobiles, covering views of the parks and public buildings, and the schools, churches, business houses and homes of Colored Washingtonians.

On Thursday afternoon, Capt. Arthur S. Spingarn presented at the Army Medical Museum a highly instructive moving picture, entitled “Fit to Fight,” emphasizing the value of physical health in the army and depicting the dangers to which soldiers are subjected in the matter of disease and dissipation, with suggestions for recreational centers and other agencies for wholesome and moral diversions for the soldiers in camps and cantonments. 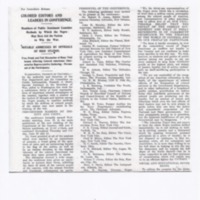