President Wilson tells House that the armistice with Germany should limiting but not be too harsh.

My deliberate judgment is that our whole weight should be thrown for an armistice which will prevent a renewal of hostilities by Germany but which will be as moderate and reasonable as possible within those limits, because it is certain that too much success or security on the part of the Allies will make a genuine peace settlement exceedingly difficult if not impossible. The position of Haig and Milner and Petain as reported by our commander-in-chief is therefore safer than Foch’s. See Baker’s despatch of today to commander-in-chief. Foresight is wiser than immediate advantage. Wilson. 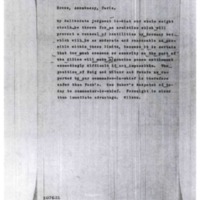