President Wilson's views on the armistice.

Replying to your cablegram from London October 26th, the President directs me to say that he is relying upon your counsel and advice in this matter, and in making the following comments he will be glad to have you feel entirely free to bring to his attention any consideration he may have overlooked which in your judgment ought to be weighed before settling finally his views.

In general, the President approves of your first, in subparagraph, but suggests wisdom of retention of at least part of German heavy guns, in pledge, and specific enumeration of territory to be evacuated other than France and Belgium. This has to do especially with territory to the east and southeast, but should not Luxemburg be also included?

With regard to your Second in subparagraph, the President raises the question as to whether it is necessary for Allied or American Army actually to occupy Alsace and Lorraine when evacuated under armistice.

With regard to your Third in subparagraph, the President doubts advisability of requiring Allied or American occupation on eastern side of the Rhine, as that is practically an invasion of German soil under armistice.

The President concurs in your Fourth in subparagraph to the extent of continuing transportation for supplies of troops then in France but would not insist on right to increase American force during armistice.

With regard to your Fifth in subparagraph, if this means repatriation of troops now in German army which have been recruited from non-German soil occupied by Germans, or repatriation of civil population deported from occupied territory, the President approves.

With regard to your Sixth, the President believes it would be enough to require internment of U-boats in neutral waters, as a further pledge and also to further unrestricted transportation of American material referred to in your Fourth, but does not think terms of armistice should suggest ultimate disposition of such U-boats, nor that U-boat bases should be occupied under armistice, as that would mean Allied or American occupation of German soil not now in their possession.

Your Seventh in subparagraph, the President approves.

In general, the President feels the terms of the armistice should be rigid enough to secure us against renewal of hostilities by Germany but not humiliating beyond that necessity, as such terms would throw the advantage to the military party in Germany.

The President would be glad to have you confer with Colonel House, who is now in France, showing him copy of your dispatch and this answer, and generally discussing with him all phases of this subject. 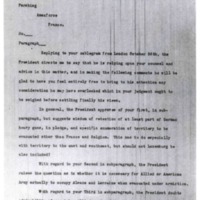