The following Personal Remarks of Baron Haniel were taken from dictation.

The present status of the situation in the East does not represent the concrete fulfillment of our acceptance of President Wilsons Four Principles.

We expect these formerly Russian territories in the East to decide their future by __otes on a broad basis.

Democratization of Germany has just in the last year made enormous progress, so that at present no step of any political importance is made without having consulted before hand, the Reichstag, through the competent committees of the Reichstag. The budget power of Reichstag is guarantee against autocracy. A great many Cabinet Officers are chosen amongst the members of Parliament.

No chance of a Revolution.

Democratization is progressing and is systematically furthered, and has already the majority in the Reichstag.

Germany’s present attitude towards the Flemish and Walloons has no bearing upon the question of the idea of Germany towards the ultimate Sovereignty of Belgium, and comes under the category of self-determination of nations. The idea that the representatives at the Peace Conference had to be confirmed first by Parliament, never occured to me before but if similarly treated by all, such a proposal might be taken under consideration.

No economic war after peace is declared,- that is, boycott or discrimination

The longer the war lasts and the greater the German military successes become, the more difficult it will be to have a peace without victory and annexations, because the people will say - “we shed our blood, after having declared our readiness to make Peace on reasonable terms without annexations, but they did not accept our offer; in the contrary they insisted upon continuing the war, with the hope to conquer German territory. Now they have to pay the price” - (This is the argument of annexationists and will increase with time and the enormous sacrifices made - simply by the continuation of the war.) This makes it more difficult for the moderate leaders.

Discussion of one sided wrong doing, out of the question, in the sense of tribunal and defendant. 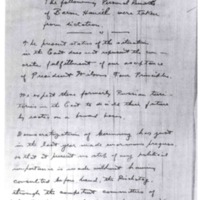