The following Personal Remarks of Mr. Nathan, were taken from dictation

I am sure that if President Wilson asked it, that the Democratic party is so strong that the ratification of delegates by the Reichstag would be accorded and the Government itself will be not against it.

We would restore the part of Belgium we destroyed but England would have to do the same. For example we destroyed Louvain. The whole thing would amount to twenty to thirty million marks.

The difference between the Military party, and the Democrats is not so much a question of annexation or no annexation, as that of the question of the degree of independence of the buffer states, and the situation of strategic military points neighboring upon the natural frontier.

The Military party says to the Democratic party - “You have done the talking. Now we are at work, and don’t interrupt us until it is finished” - 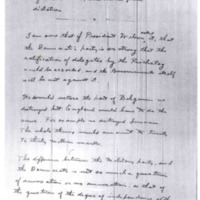