Apologizing for the manner in which WM Trotter addressed the president and describing the plan of the American Colonization Association to create a new Liberia on American soil for African Americans to govern themselves.

Please permit me through the medium of expression to utter my disapproval of the manner in which Mr. W. M. Trotter addressed you as President of the United States. I feel under many obligations to ask you apoligies for the manner in which Mr. Trotter addressed you. I hope you will credit this as an error of the head instead of the heart and not credit the same to the race as a whole and as an individual error of a member of the race.

The better thinking part of our race does not think like Mr. Trotter. Also kindly thanking you for your good will toward the race and your advice to them with reference to a complete independence of the white people, may I kindly call your attention to the fact that we have a movement on to that effect and the same is incorporated under the laws of Oklahoma, I being the Supreme President of said movement.

I have been addressing large congregations of persons for about eleven months getting the endorsement of my people. I have men in every State. I hope to get the endorsement of my people to represent before Congress with reference to colonizing them on American soil by national legislation; they to be colonized on some thinly populated part of the United States or some other place that the government will prepare for them. Negro property throughout the Union to be appraised and paid for by the government and to become the property of the government is the plan. Then, the Negroes are to be moved to this new Liberia where they would reserve a right to make their own laws by a treaty with the United States and at the same time take an oath of allegience to protect the constitutional laws of the United States.

The object for getting the endorsement of the Negroes of America is to do this without abridging the Constitution of the United States or repealing any part of the same but simply stooping to the wishes of the people for good government.

Hoping you accept this as a letter of apology to the manner in which Mr. Trotter has addressed you and also your endorsement of the movement that I have outlined, feeling your endorsement would add much to our success, I beg to remain,

Yours for the country's good, 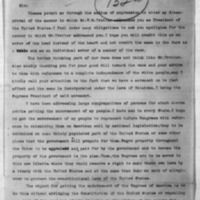