Asking President Wilson to act against segregation in the government departments.

It is with a heavy burdened heart that I, at this time address you. Even though this may never get into your hands I trust you will receive the gist of its contents.

I admire a man who has the courage of his convictions and expresses himself accordingly, even if he stands alone after his expression if he believes he is right. If he is right, the people will soon look to him as being right and follow his convictions.

Thousands and thousands of American people will acclaim as I do, that the Greatest and most Glorious President we have ever had has been in the person of Hon. Woodrow Wilson. Next to him, had he been elected, would have been the greatest Governor the State of Penna ever had, in the person of Vance C. McCormick, whom I know personally and for whom I labored day and night. My labor has been hurled back at me and my associates by my people (the Negroes) of this community, because of recent scenes which took place in Washington, between Pres. Wilson and G. M. Trotter of Boston. Now Mr. Trotter is a newspaper man and no doubt has reaped the benefit to some extent. On the other hand there is no doubt that segregation exists in Washington, under your administration in the various Departments of which the heads of such Departments are not held responsible but the head of the Nation, the President.

As Pres. Wilson is too Grand a man to stand under such indictments, may I plead with you Honored Pres., in the name of God and for the sake of the "black race," that you do what you can and that which is in your power to alleviate such conditions. The negro race has borne shackles and bondage long enough, and, we have proven ourselves capable and able to qualify with any other race of mankind, if given a chance.

Segregation is not a benifit to any race of people, and particularly is it offensive to a Christian nation, and a man who claims to be a son of God by the New Birth through the Redeeming Power of Jesus Christ, must by necessity go back to where he received his New Birth, and there, he will find that God so loved the world that He gave His only begotten Son that whosoever believeth on Him might be saved? God is no respecter of persons.

Senators and Congressmen who will present bills and try to legislate against the laws of God is not a fit subject to represent his district.

May God give you the courage, Pres. Wilson, of your conviction (if you believe it to be wrong) to tear down the screen of segregation and "Jim Crowism" and let us mingle and co-mingle in a spirit of Patriotism and as true born American Citizens let us join with our white brothers in the spirit of Friendship, Love and Truth, in the spirit of Charity and Benevolence, in the spirit of God, do unto others as you would they should do unto you. I would to God I could pour out my hearts feeling that it would inoculate you as I am inoculated. I trust that I have said ______ for you to understand me as is intended.

I should be glad to hear from you. No other President has established such conditions and you are too good a man to set up a precedent which will be torn to pieces by the Republican Party in order to gain and keep control of various public offices. They have already used that as a pretext to muster the negro vote in this state. The negro vote is a factor where he has the right of franchise in the south land as well as in the north land and naturally the negro is going to vote for the party who befriends him, and the man who stands for righteousness will be lost sight of frequently by virtue of the party affiliations. May God help you to preserve the rights of the negro as well as the rights of Democracy.

May God's blessings be yours in proportion to your good works. Lend us a helping hand, I am 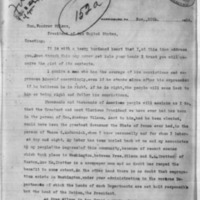