Papers from 1930s and 1940s from William, son of Cary T., including material from his service in WWII.

William Cabell Grayson was born on May 28, 1921 in Washington, D.C.. He was the son of Cary Travers Grayson and Alice Gertrude Grayson who was formerly a Gordon. He had two brothers; James Gordon Grayson and Cary Travers Grayson Jr. His father was a Rear Admiral in the United States Navy and a physician to three Presidents: William Howard Taft, Theodore Roosevelt, and Woodrow Wilson. At his death on February 15, 1938, William’s father was also the head of the American Red Cross. After his father’s death, William’s mother was remarried to George L. Harrison. Harrison was a one-time chairman of the board for the New York Life Insurance Company and he was once the president of the Federal Reserve Bank. William was educated at St. Alban’s School in Washington D.C., where he was president of the senior class. At the collegiate level William attended the University of the South in Sewanee, Tennessee. He also studied at Yale University where he graduated in 1944. At Yale, he was a member of Delta Kappa Epsilon, Torch Honor Society, and Skull and Bones. During World War II, he was a lieutenant in the United States Marine Corps and he was mostly located in the Pacific throughout the duration of the war. After World War II, William was employed with NBC Television in Washington D.C, before taking a job at the Smithsonian Institution. He married Janet Ketchum, who was the daughter of Mr. and Mrs. George Ketchum, on April 15, 1951. Janet was a graduate of Chatham Hall and Vassar College. Later in life, she was a member of the Junior League of Washington and was employed at the State Department for some time. William and Janet had three children: William Cabell Grayson Jr., Katherine Mary Grayson, and George Grayson. William Cabell Grayson died on April 15, 1980.

The documents within the William Cabell Grayson collection contain many correspondence, ephemera, and newspaper clippings from the years 1909 to 1953. The records are mostly correspondence to and from William and to and from his parents (his mother and George L. Harrison, his stepfather). The collection also includes correspondence to and from William’s brothers Cary and Gordon and ephemera that belonged to them. The records offer an insight into the lives of the Grayson family and the strong emphasis they must have placed on keeping in touch with their loved ones. Besides, family life, the records also provide a glance of the upper middle class in the 1930s and 40s. One subject that is heavily covered within the back and forth correspondence is travel. William seems to have traveled all over the U.S., Mexico, the Caribbean, and Europe and he makes some great comments about each of the places he goes. Also, because of his military involvement during World War II, the records give some information regarding the U.S. Marine Corps. Other topics that are touched on are collegiate experiences of the time, social status, marriage announcements and sports. However, the main subject matter is personal communications in which William says hello to his parents and lets them know that he is ok and he misses them. Only briefly does he talk about any other areas that may be of interest to research.

There are several authors of correspondence that are of note within this collection. The most numerous of these are written by George L. Harrison and they range from 1930 to 1951. However, again it should be noted that they are mainly to say hello and communicate travel information. In some cases though, Harrison mentions sports and politics. The collection also contains invitations and thank you notes from President and Mrs. Roosevelt, Senator Carter Glass, Bernard Baruch, and Edith Wilson.

In addition to correspondence, this collection also contains a numerous amount of mixed media. The scope of this material shows the varying interests that the Grayson family, and William Grayson in particular, participated in and enjoyed. Topics within range from sports, horse racing, entertainment, dances, several of the Grayson sons’ alma maters, travel, military memorabilia, wedding and engagement announcements, and multiple other forms of media that the Grayson family would have been exposed to during the inclusive dates of this collection.

The records within this collection are mainly concerning the Grayson family’s life and social interactions. They paint a good picture of what upper middle class family life was like within the dates that this collection encompasses. 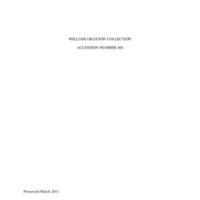