Just a few words about the exams. As mentioned in the enclosed letter, I do not expect to move anyway. In consequence of the exams I was listed to go to an Officer’s Training Camp very soon but upon reconsidering the matter from every angle I have finally come to the conclusion that I will be better off as an enlisted man. Have requested my commanding officer this morning to cancel my name on the list. Of course, I realize that it is a sort of an honor to be a commissioned officer but there are some other things which have decided me against it. From a financial standpoint, especially if peace should be declared within the next half year which seems probable, it is an absolute loss. Even though an officer gets more pay, the outfit is a tremendous expense and besides he has to pay for his subsistence, etc., and I’m certainly not in this game to loose. Then there are a lot of responsibilities and uncertainties to contend with so, as already stated, I’ve decided to withdraw. Of course, if this were my life’s profession, it would be a different thing, but I’ve decided to have as little worries in this game as possible. It isn’t quite certain yet whether the C.O. will be able to withdraw my name but he has promised to take up the matter. Will know more to-morrow. 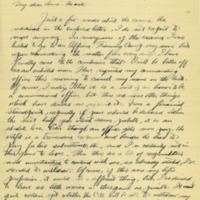