I was very glad to receive your letter of the 1st inst. and want to thank you most sincerely for same. It was awfully good of you to write me such a long, interesting letter. Your letter card of the 2nd inst. also arrived today for which also many thanks.

As I just recently wrote father about all the doings down here and as, no doubt, you have read that letter, there is really nothing new to write about. I am still well & happy, and even that is nothing new to write. Yesterday I went to Spartanburg with two friends for supper and a movie show. We saw Mary Garden in ‘Thais’, a wonderful picture and very pretty and artistic.

How is poor little Rhoda getting along? It certainly is a shame that the sweet kiddie had to suffer so much and I hope that by this time she will have gotten all over her illness.

Was glad to hear that Paul is getting along nicely; also that the girl is fairly satisfactory.

In regard to Uncle Gus’ birthday—I’m really glad you reminded me of it and immediately wrote him a letter. However same will reach him about a week late. Somehow or other I always forget these dates.

I was very glad to hear that you have been able to go out to the theatre and also with Paul Koechle; such changes, no doubt, do you a lot of good.

So Anna is at her old tricks again & I suppose there’s nothing else to do than to leave her alone entirely after this. It is too bad that you have so much trouble in this line.

Yes, there certainly is a lot of mix up on the other side. It’s really hard to tell just how things stand. I read about that officer who got sentenced to 25 years and, of course, although it’s pretty hard on him, he had taken the oath and got just what he deserved. There can’t be any half measures taken about these things at this time.

No, I don’t keep any letters at all as I really haven’t got any good place for them and furthermore wouldn’t want them to go astray. Of course, they would be very interesting later on but it’s just as well to destroy them.

I received a letter recently from Elisabeth in which she wrote that Mr. Franke is getting along very nicely and expects to go to Lakewood with Mrs. Franke for two weeks. I believe Elisabeth’s birthday is on the 17th of this month and so I bought a very pretty pillow-top which, I hope, she will like. It is decorated with a service flag, the Quartermaster’s insignia and the letters ‘Camp Wadsworth‘.

I haven’t quite got used to getting up at 6:a.m. but it’s got to be done now so there’s no use kicking.

With love to all,

I wrote all ready about these wristlets from Miss James. They haven't arrive yet, so I guess she didn't send them. 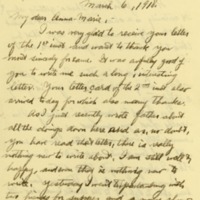