Many thanks for your letter of the 23rd inst. which I was very glad to receive. I was, indeed, extremely glad to hear that you have succeeded in getting a servant again and do hope that she will pan out allright. In fact, I was rather surprised that you succeeded in getting a German girl which, of course, is worth a whole lot even though she may not be so efficient in the beginning. No doubt you will also be able to get Anna again every week as soon as she recovers.

Glad to hear, also, that you and the kiddies are quite well and that Paul is getting along so nicely in school. Please give them both a nice kiss from me.So you still had wintry weather up north! But I guess you’ll soon have it a little warmer, so cheer up! Here it is just wonderfull—regular May climate and temperature. This, no doubt, is the best time down here as soon, it will probably be quite hot. Nevertheless, heat agrees with me better than cold, so I’m not worrying.

It was certainly very nice of Miss James to ask you to send me these wristlets, especially as she knitted them herself. However, I cannot thank her yet as they haven’t arrived. I wonder whether she sent them and they have gone astray? But probably she didn’t want to send them direct. I appreciate it anyway, although they wouldn’t be of any use to me now.

I do not know Mr. Bartles, at least I don’t believe I’ve met him. However, from what I have heard, he as well as Mr. Berents seem to be very nice people. The latter, of course, I’ve met. I think you would like them, so why not ask them over some time? You know, most people have to be invited, it isn’t because they don't care to come.

I can just about guess what Paul K. told you about. No doubt he can tell some interesting things but they have to be taken with a grain of salt on account of their particular ideas and feelings about the present time. They are very much inclined to down everything over here. Would also like to hear just what the Valkierpa’s have to say; they must have witnessed a lot of interesting things.

As I see from your letter that you find the ‘Gas Attacks’ entertaining, will continue to send same and would ask you to keep them as they will be rather valuable to me later on.In regard to having a companion with you in the evenings, couldn’t you ask Miss E. Capelle to come over for a while?

I have not written to the Church in regard to the helmet sent home as I believe father thanked them for me. However, if you think it necessary, will do so.

I wrote father last Sunday night and as nothing in particular has happened down here since that time there isn’t really anything particularly interesting to report.

Yesterday evening I saw a very nice show with E. Buechner at the Camp Liberty Tent. A different performance, or rather entertainment is given there every week—and they are very interesting. The show consisted of songs, dances, etc. and was quite pretty, especially as four very pretty girls took part in it!

We are not very busy just now, in fact a good part of the work of our department is now done by each individual organization and consequently we’re just sitting around most of the time. I don’t know just what will be the outcome but no doubt some rearrangement will soon be made as there’s too much help here now. Probably some men from this department will be transferred to some other department of the Quartermaster Corps and whether this will include me I can’t tell as yet. However, it’s really just as well as I can thereby see a little more of the workings in this Corps.

I am feeling great all the time. Had a little trouble with indigestion lately and saw the doctor about it. However, after following his instructions and cutting out medicines, and after getting in the habit of drinking a lot of water, I feel a great deal better. I wouldn’t have mentioned all this, but I promised to let you know all about my health. At any rate, I’m in perfect condition again.

My former company is now in the trenches for 72 hours and I’m certainly glad I’m not with them any more. The other night I visited the old company and found very few of the old fellows left. I guess will soon get a lot of drafted men down here to fill up the various organizations but, of course, I am not allowed to give any dope about troop movements.

Next Saturday I expect to go to town again with a friend and stay there over-night. It sort of breaks up the monotony of things. Last Tuesday evening we had a movie in the YMCA—’The House of a Thousand Candles’. To-night there’s another movie show—’The Whip’, followed by a band concert.

I guess it’s soon time to shed my winter clothing and it’s a good thing, too, because I’m still wearing the same woolen breeches, in fact the same I wore down on the border. It’s very hard to get new clothing unless the old is pretty well ripped to pieces.

Hoping everyone is well and with love to you, father, and the kiddies. 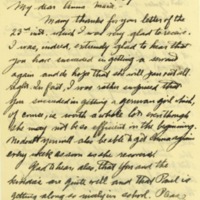