Elaborate Greeting for 23d in Kansas

Elaborate Greeting for 23d in Kansas

______
ARRIVE AT KANSAS CITY.
______
Soldiers Still Suffer From Poor Train Facilities, but Are Optimistic.
______
(Special to The Eagle.) Kansas City, Mo., July 8—The Twenty-third Regiment arrived late last night in this city of abrupt hills, near plateaus and the muddy Kaw. The Brooklyn men obtained the first view of a real Middle West river when they crossed the bridge leading to the big freight yards that separate “K. C M,” from “K. C. K.,” the latter the Kansas town which is just across from the big stock yards.

Colonel Norton’s first section arrived here perhaps 12 hours before the other section, but the men in both commands were still cooped up in the old Erie cars which have been their home since the Fourth of July. Earnest but vain efforts had been made in Chicago to get either the Erie or the Chicago and Great Western to provide new rolling stock. Both roads said they could do no better. From here, south, the regiment goes over the Frisco lines, and better conditions are hoped for.

The men received the greatest reception of their trip at the little Iowan town of Oelwein early in the evening. Oelwein has made an enviable reputation for itself by its treatment of troop trains, but surpassed itself when the Twenty-third arrived. A baggage car filled with ice cream was on the siding and the girls of the town served the men of the command. No soldier was allowed to spend a penny in the place, all tobacco, soda and other desirables being the gift of the storekeepers.

At Byron, one of the last towns in Illinois on the C. and G. W. the men were allowed to take a swim. They splashed around in Rock River to their hearts’ content, and each squad was watched by a superior officer, who warned against currents or against venturing too far from shore. The men enjoyed the bath, for although they had had bathing facilities in Chicago, the latter were none too satisfactory.

At Stockton, Ill., there was a band waiting for the regiment, and for the few moments the Twenty-third waited in the station they were amused and entertained by its windy efforts. Some of the men left the train and clogged and danced on the station platform.

Sergeant Harry Hobson of the commissary squad in the first section was left at Chicago. Major Kevin, the surgeon of the regiment, said that Hobson was suffering from pleurisy and the guardsmen was sent to the Presbyterian Hospital, where his case is said to be serious.

At Chicago, Lieutenant G. M. Keese left for Brooklyn, where he will attend the funeral services of his child, who died of infantile paralysis just after the Lieutenant left the city. Lieutenant Kenneth Long of Company H was assigned to fill the vacant place in the commissary department and Lieutenant C. B. Ulrichs was made mess officer in the second section.

The second section caught up with the first at Chicago, but later the first went out ahead. Lieutenant Colonel Wells’ men are finding the trip more arduous than the other section for they are sleeping two men to a seat while the others have three men to every two seats. Guard has been established in the second section. The men do sentry duty all the time, two hours on and four hours off. The idea is to keep the cars clean and orderly and to prevent men from passing between cars while they are in motion.
______

The Eagle received a post card today from Private Hall of Company H, Twenty-third Regiment. It was dated Chicago, and read:“The Twenty-third arrived here about 8:30 a.m. Boys expect to see something of this ‘rival of New York,’ The trip was fine and people were very kind to us, all cheering. Had fine cool days and nights. At Meadville, Pa., Elks had stamps and postals while train stopped there for five minutes. We leave at 3:30 p.m. Thursday.”
______
McAllen, Texas, July 8—The uncertainty about the coming of the Sixty-ninth Infantry to the border was set at rest here yesterday when it was announced that the Twenty-third of Brooklyn would take its place. The Sixty-ninth will not leave New York and the Twenty-third, now on its way, will locate at Pharr. 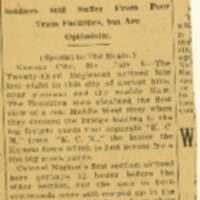