Just a few lines to tell you that I am still in good health! There isn’t really anything else to write about this place as one day goes by about just the same as every other. Drills in the morning & 1 hour in the afternoon, company clerkwork, keeping clothes, etc. in order, cleaning rifle, etc., all these things keep us busy right along and are done about every day except Sunday. (Holidays do not exist in the army and many Sundays are just like other days). There was one exception however this morning; instead of drilling we had our finger prints taken as per sample enclosed. No one will think of deserting now!

On the 22 of this month we go on another march & expect to be on the road for six days—60 miles altogether. On the third day we will reach La Gloria Ranch where target practice will take place. Our captain is still in the hospital at McAllen, Texas—he has dengue fever—nothing very serious but breaks up one’s constitution completely.

We are, of course, all very anxious to get back to New York as soon as possible but there is absolutely no indication at present as to when this will be. Carl Jellinghaus was certainly lucky that his enlistment expired early in September. I heard of this when I went up to McAllen (7th Regiment Camp) to visit him. Yesterday one of our fellows went home—his time was also up. I hope we don’t stay until my time is up, that is June 23, 1919! We wouldn’t mind this if there was really some object in view—but I really can’t see now that we will ever get active service. In June I really thought there would be war, but well there’s no use kicking and I’ve had a lot of experience which will be good to think about later on. I can hardly realize that it’s nearly winter in New York especially as we left when Summer had hardly begun!

1—23 Regiment Camp. This was some time ago before we built our wooden mess Shacks which now stand where you see the first tents on each street. Each street is occupied by a company. On the left are the officer’s tents—2 to each company. The 1st & 2nd Lieutenants live in one tent; the captain in the other. The first sergeant & I live in a tent just like these; the rest of the company lives in the large tents—8 in each.

2—Company A Street—All these streets, of course, were laid out and built by us—when we arrived last July there was nothing but a sand desert. Way in back—about 8 miles off is Mexico.

No. 3—The Colonels tent in the center, in back of flag. Everyone passing this flag must salute just like the soldier in the picture. This street is in back of the officer’s tent as sh shown in picture no. 1. The long street shown on no. 1 picture we call Bedford Avenue.

No. 4—One of the company streets after the big hurricane in August. Many tents were blown down, some torn in half, and others completely flooded by water, everything inside being soaked, of course. Some men didn’t own a dry stitch at that time. Luckily our little tent lived through it all right! However, I was sitting in the middle of it for hours holding onto the tent pole—not to keep from flying away, although this was pretty nearly possible, but to keep the tent from collapsing.

Let me hear from you soon. Give my love to all, not forgetting the children! 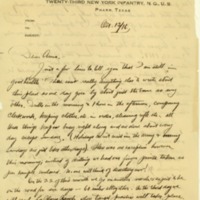