Writing in regards to making a report on the race riots in Arkansas.

I am returning herewith the telegram sent from Little Rock, Arkansas, requesting the story of the Department of Justice investigation in the race disorders in Arkansas. I have to advise you that the office at Helena, Arkansas, has received instructions to render a full and detailed report upon this matter but the same has not been received, due to the fact that the agent is withholding his report until the conclusion of the trial of the persons connected with these disorders. It is the intention of the agent at that time to make a complete summary upon the investigation. Whether or not it would be advisable for this department to disclose its information at that time is a matter which is a question of policy.

In this connection, I might state that I have received communications from several Senators requesting to be supplied with a complete report upon negro agitation in the United States and I am preparing the same at the present time, which I believe it is the intention of Mr. Garvan to submit to the committee. 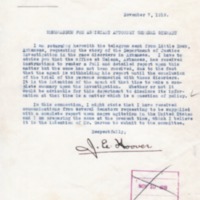