Recently I learned from unquestionable authority that a political group in Texas has criticized the colored Government workers in the South, declaring they were only a political machine working in the interest of the North. Of course, we know that this is not true so far as the Texas Negro Extension Workers are concerned, but this charge reveals one or more facts: First, it reveals that there are influential people who do not favor a special negro extension force; second, that we must be careful in all our public utterances not to give ground for the charge that we are mixing other problems with the extension work that have no official connection with it. I have called attention to this matter before and I must and do insist as the head agent of the negro extension work in Texas, that we avoid mooted religious, political or racial problems because these problems involve questions as to which the public entertains various opinions. For example, it would not do for me to preface my remarks every time I spoke with the statement that the Baptist faith is the true faith once delivered unto the Saints. Of course, personally I believe this, but when I am talking as an extension worker I have no right to make any sectarian statements, and the same rule applies to the race problem. Our opinions are doubtless identical on this problem, but there is a large body of citizens who do not think on this problem as we do, hence when we refer to the race problem it should be done judiciously and in a way to make peace between the races and not discord. Besides there is a large body of colored men and women who are quite as competent intellectually as any of us, comprising editors and other leaders, who make it their business to present to the public the negro view on the race question. These people are doing this task very effectively and we may well leave it to their hands and confine our efforts to the work we were employed to do.

I think it appropriate in this connection to call attention to the fact that the white extension workers are not discussing the race problem, but uniformly they are trying to help the negro farmers in their territories. Have you thought that they have just as much right to discuss the race problem in a way that would awaken antagonism among the white people toward black people, as we have to discuss the race problem in a way that would stir animosity on part of the negro people toward their white neighbors? And remember, too, that whenever we start awaking antagonism, that the other side is even more capable of awaking antagonism against us and backing it up than we are of making any success in our efforts to create antagonism on the part of our race as against the white people of the community. And in conclusion I should think we could all see that what we need is the confidence and friendship of the white people to replace the present attitude of suspicion and distrust with which many of them regard us. Another thing is, it is often said that if you give black people positions under the Government they will be unable to hold themselves to the task for which they were appointed and will tend to break loose and overstep the bounds of authority, reason and common sense. I hope none of us are going to make these words true. 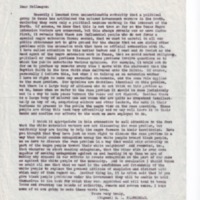