Washington Post article reporting on number of lynchings in U.S.

Tuskegee, Ala., June 30. —Thirty-five persons were lynched in the United States in the first six months of this year, according to announcement by the division of records and research of Tuskegee Institute.

The total exceeds by 21 the lynchings for the first six months of 1917 and by 10 the number during a similar period in 1916.

Thirty-four of the 35 persons lynched were negroes. Three negro women were included in the list. 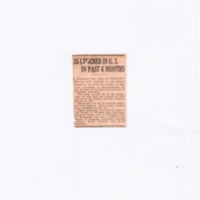