AB Whitby et. al. (Colored Citizens of the City and State of Oklahoma) to Woodrow Wilson

AB Whitby et. al. (Colored Citizens of the City and State of Oklahoma) to Woodrow Wilson

Requesting Wilson use his position to help end lynching and other forms of discrimination in the U.S.

To His Excellency, Hon. Woodrow Wilson,
President of the United States,
Washington, D.C.:

We, the colored citizens of the city and state of Oklahoma, in mass meeting assembled this eighteenth of December 1917, do hereby most respectfully and humbly lay before the President of the United States the following grievances of which we do complain, and against which we do most respectfully and earnestly protest: Against torturing, lynching, and burning of our men, women, and even boys; against the exclusion of colored citizens from the jury box and the ballot box; against those unjust laws that compel us to travel in uncomfortable and unsanitary coaches on trains, in many sections of our country; against the use of flimsy, wooden coaches placed between steel coaches, and thereby becoming death traps for Negroes compelled to ride in Jim Crow cars; 21 Negroes are dead in a wreck on the 'Frisco Railroad from such negligence-- against those unjust laws that force us to enter and use uncomfortable and unsanitary waiting rooms at travel stations; against those customs or laws that compel many of us to live and do business in unsanitary sections of many cities; against unjust discrimination in school facilities, advantages, and comforts; against that spirit of prejudice, which, in some sections of our land, deride and mock at the uniform of colored soldiers, and insult and injure colored soldiers and officers.

We condemn in unmeasured terms all forms of mob law, riot, violation of law, and lynching; but above all we condemn in our fellow citizens that spirit of race prejudice, and those conditions that foster and lead up to mob violence, lynch law, and murder.

The Negro race is loyal, and will, in the present crisis, be loyal at home, in camp, on field, and in trench; and is striving hard to measure up to that standard of manhood which true citizenship demands.

We Negroes, in mass meeting assembled, do pledge anew our allegiance to our flag, our country, and its rulers.

We are mindful that thorough and public investigations by public officials are not often made of all the facts and causes that lead to violations of law, and to mob law, riot, bloodshed, and murder.

We do most earnestly desire that the brave, loyal, colored soldiers who shall be called to fight and serve on European soil, shall go wholehearted, feeling, with pride, that better treatment is being accorded their loved ones left behind on American soil; and that this great country is striving to meet out just and fair treatment to all citizens, in civil, political, and industrial affairs.

We are mindful that nothing so soon and so swiftly destroys the morale of a soldier as does the knowledge that, while fighting bravely for a righteous cause, he is unjustly discriminated against, and unfairly treated in certain sections of his own country for which he is sacrificing, willingly, home, friends, ties, and even life itself.

We plead with the President of our great country for aid in suggesting and recommending to the law-making and judicial departments remedy for the evils of which we complain, and in effecting changes in the conditions of which our grievances are born.

Your obedient servants,
A. B. Whitby
Chairman. 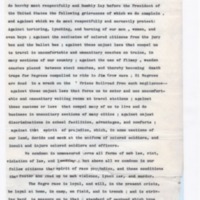