Reply acknowledging receipt of the National Independent Political League's request for a meeting. Cannot schedule meeting at the desired time.

Your favor of the 9th instant asking for an appointment for a Committee from the National Independent Political League to meet the Secretary of Commerce for twenty minutes sometime during the present week is received. In response let me say that it is utterly impossible for me to make such an appointment this week as the time of the Secretary is completely occupied for the next two days with appointments arranged before the receipt of your letter. For this reason I have not brought your letter to the Secretary's attention as you do not state whether a later appointment would suit your convenience. If you desire to see him later on and will advise me the size of the Committee and the subject you wish to discuss it will make it much easier for me to arrange for an appointment. 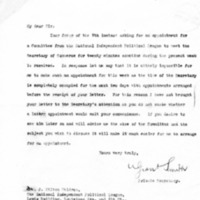