Successfully built wooden ships should be put in their own unit after war.

I gladly acquiesce in your suggestion and request that I put into writing the substance of what I had the honor of saying to you in the interview granted me this afternoon on the subject of the wooden ships now being built, under the authority of the Shipping Board, by contractors at various yards in the country.

First, let me reiterate my sincere wish to be of use to the Board and the Government in what I may say on this subject. This, and only this, was my purpose in speaking to you. In common with an overwhelming proportion of our citizenship I sympathized with and approved the attitude of our great President when, at the inception of the effort, now being so triumphantly vindicated, to off-set by new construction the awful toll exacted from our merchant fleets by the enemy’s submarine, he decided that, along with the program for producing steel vessels as rapidly as possible, there should also proceed the building of wooden ships. Such ships have had a long and honorable history. In spite of the advent of the vessel of steel, of larger tonnage and more efficient and economical operation, the wooden ship could still find in certain specialized and restricted routes a field of useful employment for a long time to come; while, during the exigencies of the war, it would, if wisely planned, properly built, and prudently managed, advantageously supplement the steel tonnage available from existing sources and new construction.

It is obvious that the success of this program pre-supposes a right design and the proper construction. The architect, in designing a ship, ought to have clearly in mind the object of efficient operation as being quite as essential as considerations of construction detail. And this not less in emergency construction than in any other.

This view has been confirmed by my observation and experience during many years in every department of the construction, operation and management of both wooden and steel ships. When, therefore, a few weeks ago there was assigned to the Wolvin Line the operation of two of the new wooden vessels building at Texas yards, which were reported as ready for service, I went to Beaumont for the purpose of installing the crews, it was with great astonishment that I found, throughout the ships committed to my control, in common with all others of the same type in the Beaumont yards, convincing evidence that they must have been designed by somebody who either did not understand, or, if he understood, deliberately ignored, the conditions of practical operation. The design absolutely disregards the ordinary principles affecting cargo capacity. An observance, in the construction of these ships, of the elementary requirements of the art would have worked an economy in carrying space of not less than twenty per cent., deadweight capacity, and of not less than thirty per cent. in measurement tonnage.

Let me make myself quite plain; First, properly redesigned, these ships, with a bill of material of substantially the same aggregate as that involved in their present construction, could be made readily to realize the economy just stated; and, secondly, it is perfectly practicable to redesign the vast majority of the authorized ships of this character, only a small percentage having been completed, with no alteration of the model affecting the speed of the ship, with no appreciable loss of time, and with an actual reduction in cost of construction; and under the approval of Lloyds or some other standard classification bureau.

When, Sir, I came to reflect upon these facts, and I assure you that they are facts; and when my mind followed out the implications of these facts to the vast dimensions of a proposed fleet of hundreds of vessels produced at a cost of hundreds of millions of dollars, I felt that I owed a duty to the country and to the men charged with so great a proportion of the responsibilities of the supreme struggle we are engaged in, and that I need make no apology for bringing the subject sharply to your attention.

It is germane, I think, to notice briefly another matter. It seems to me a mistaken policy to allot these wooden ships piecemeal among operating steamship companies, one to this company, two to that, and three to another; under conditions calculated to involve disproportionate expense, lack of attention and supervision, and the absence of any permanent policy for the economic employment of these ships and the systematic development of trade routes and opportunities appropriate to them. If, on the contrary, the wooden ships were segregated from the steel and given an identity of their own and a separate management, they could be made the subject of a careful and comprehensive program whose operation would both economize the steel ships and profitably extend the service of the wooden carriers into regions whose commerce would otherwise languish or remain wholly undeveloped. Under the present policy the end of the war will see the wooden ship discarded by the companies operating ships of steel, thrust, as it were, into a limbo of non-use and discredit, not only a loss but a reproach.

Far otherwise would be the result under the plan I venture to suggest, a plan whose realization would be profitable to the country and a justification of the wise foresight of the President who contemplated the wooden ship as not merely a present convenience but a future utility, not only a stop-gap of U-boat destruction but a servicable instrument of world commerce.

I should not have said so much if I lacked the courage of my convictions; if, after pointing out mistakes and indicating remedies I were unwilling to invite the responsibility of demonstrating the one and supplying the other.

In short, while I am not seeking this service, I am quite willing to undertake it. The two functions I have specified, namely that of re-designing the authorized type of construction referred to, and that of operating the wooden ships as a separate system, are within the compass of any man of fair ability, adequate energy and an experience embracing both the building and the running of merchant ships. If this double duty were devolved on me I should engage to redesign the proposed wooden ship without delay to construction; to construct the great remaining unconstructed or unfinished proportion of these ships within the now estimated cost and with a gain of at least twenty per cent. in cargo-carrying capacity; and to guarantee a saving of at least thirty-three and a third per cent. per ship as compared with the expense authorized by the Board (see Form 263-E.F.C., “Agreement For Conduct of Ship’s Business”); an aggregate economy, in a program of the magnitude officially stated to me as contemplated, of approximately a million dollars a year in cost of management.

For the performance of these respective suggested services I should, of course, expect to give a suitable surety bond.

I do not know what procedure you will adopt in the consideration of this subject, but permit me to suggest that action should be taken speedily if taken at all. The more of these ships that reach a stage where their construction cannot be conformed to a re-design, the greater the loss that is irremediable. If undertaken seasonably the construction of a great many of these vessels can be completed with a savings of two months’ time per ship. 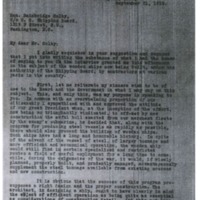