My friend, Doctor Axson, whom you of course know, buried himself in his room last summer and has stayed buried pretty much ever since. Comparatively recently I found what he was up to – that he had got so infatuated with Abraham Lincoln that, as he says, he simply had to put some things down on paper. The result of it is a book, which is drawing near to completion, and which, in my opinion, is a gem. It is on new lines:In the first place, Doctor Axson is a Southerner, whose father fought in the Confederate Army, who himself was a child in the Reconstruction days in the South, and was partly educated in the South, but who, notwithstanding, has had for 25 years or more such adoration for Lincoln that at last he found himself compelled to write about him. In the second place, the book is not formal history but is a literary man’s treatment of biography and history. You perhaps know that Doctor Axson is a Professor of Literature – not of History. In the third place, it is a philosophic book. Doctor Axson has a distinct point of view about Lincoln as a combination of the popular idea of him, the familiar sort of man that everybody knew, and a man of such profound mystery that nobody ever can explain him. Doctor Axson remarked that if he thought he were explaining Lincoln he would tear up his manuscript. It is rather to impress the mystery than to explain Lincoln that he has written. In the fourth place, with all the admiration which the book expresses for Lincoln there is keen, critical analysis, which is what I would have expected from Doctor Axson’s naturally analytical mind. In the fifth place, it is philosophy of life, as well as of Lincoln, – the meditations of a man who has lived a good while and thought a great deal, and who has made Lincoln a medium through which to express a certain philosophy of individual and public life. Doctor Axson says that the hardest part of the writing has been to talk about profound things in a familiar way, and the result is that the book has solidity and charm. Ever since last June he has been spending about twelve hours aThe book is not a formal biography but a series of essays written in a conversational literary style – more the style I imagine in which literary critics write than historians. Yet behind it all is a solid body of information. Here is a new kind of book – literary in style, authentic in information. While it was not Dloctor Axson’s intention at all to write a biography of Lincoln, the fact is that anybody who reads his book is bound to feel that he has learned a great deal, not only about what sort of man Lincoln was but also what Lincoln actually did.

Doctor Axson has been trying hard to compress the book into a small volume, and he hopes that he has not more than about 300 pages. He says that his problem has been “condensation and discursiveness”; that he has wanted to give the impression of one sitting down talking familiarly about Lincoln and telling the facts indirectly, or, as he says, “obliquely”. He calls his book “ENIGMATIC LINCOLN” – and the idea suggested by that title runs through the volume of the man of mystery behind the familiar every-day figure. What I think Doctor Axson has done is to write a profound book in a popular fashion.

I am writing this letter voluntarily. Doctor Axson did not ask me to write to you. But I found that he was thinking of submitting the manuscript to Doubleday, Page & Company. As soon as I heard that I determined I was going to write to you and tell you that while of course I should be glad for my friend’s sake to have Doubleday, Page & Company accept the book, I honestly think I am doing them a favor in calling their attention to it.

I have in mind what you said to me some time ago – that in case I myself at any time should writinge anything to be sure to get in touch with you. Some day I am going to do that, but, meanwhile, there has come up the case of Doctor Axson and his book, and I am writing to you about that in the same spirit in which you asked me to write you about my own matters.

With warm regards and best wishes, believe me to be 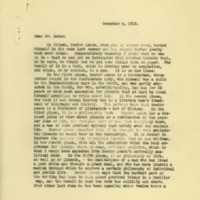