Carl Ackerman writes to Cary T. Grayson about contributing a chapter about President Wilson, along with several notable contemporaries to the proposed memorial volume from the Cathedral Foundation.

As I have been associated for some time with the National Cathedral Froundation, I suggested to the authorities in Washington last week the possibilities of publishing a memorial volume to former President Wilson. Today I spoke with Harper & Company to ascertain whether they would be interested in publishing the book. Encouraged by Harper’s and by the Cathedral authorities to determine the advisability and possiblities of the book, I am writing to ask if I may have your frank opinion, confidentially, before the matter is again taken up with the Cathedral Foundation.

You may recall that I was a correspondent at the White House in 1913 and 1914, and that I traveled with President Wilson as a newspaper man on a number of occasions. The theme “The opinion of the world is the mistress of the world”, which he spoke on in Atlanta in 1914, is the theme which I thought might be developed by Mr. Wilson’s friends and associates in a memorial book. It seemed to me that if Mr. Henry White, Mr. Baruch, Senator Glass, Secretary Baker, Dr. Van Dyke, you and others of Mr. Wilson’s friends and associates could write the chapters of the book, it would be a volume which would be of interest to a large number of Americans. I thought that perhaps Bishop Freeman might write an article on the religious ingluence in the life of Mr. Wilson, mentioing incidentally,an only incidentally, the Washington Cathedral. I believe that if the book were undertaken and the articles obtained that Haprper’s would publish it. I believe the book would be successful. I believe that it would be a sincere tribute, and a valuable contirbution toward the promugation of Mr. Wilson’s ideals. Before making any recommendations to the Cathedral, I would appreciate very deeply your advice. 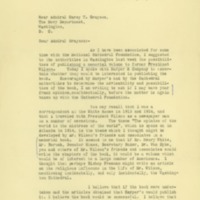