Sturdiness of Texas bred ponies capable of bearing bandy-legged cowboys through weary hours of cattle herding has proved conclusively that physical elements of the State tend to impart endurance to thoroughbred racing animals—the quality sought most by fanciers of fleet mounts.

That was the belief expressed Wednesday by Admiral Cary T. Grayson of the United States Navy, medical adviser to three Presidents and himself a raiser of animals of fine racing strain, who will serve as a steward at Arlington Downs.

“Raisers of horses in Texas should be able to impart endurance to horses of every description, whether they be for polo, for cavalry mounts or for domestic purposes,” Admiral Grayson said.

“Diversification has been urged, I understand, by those interested in the welfare financially of farmers and ranchmen of this State. In Kentucky and Virginia farmers often raise and sell thoroughbred colts at remunerative figures. The breeding of these animals is a pleasure and a profit which lovers of good horses in Texas might well follow. I believe that W. T. Waggoner, in establishing racing at Arlington, will do much toward encouraging the raising of better horses in Texas, where the climate is much in favor of the business.”

Admiral Grayson, who came here in company with A. B. Hancock, Maj. T. C. McDowell and C. W. Hay, Kentucky horse raisers, was warm in his commendation of the Downs racing plant.

“I was surprised at its completeness,” he said, “and Mr. Waggoner and his sons are to be congratulated in their pioneer movement. The track and buildings, I am sure, compare favorably with any in the country.

Clean horse racing will withstand inroads from any other sport, Admiral Grayson believes. The big crowds to be found at the Kentucky Derby as the thoroughbreds face the wire and thunder around the turn prove this, he said.

“The greatest crowd at any sporting event, you must remember, was last year at the St. Ledger Derby in England. There were 600,000 people in the stands and along the course; that doesn’t indicate that the ‘sport of kings’ is losing favor.”

Horse racing is Admiral Grayson’s hobby and recreation; the prevention of disease is his life’s aim. On Dec. 20, after almost 30 years of service with the Government, he will give up his commission to become president of the Gorgas Institute, an organization having for its chief aim the discovery of circumstances tending to cause disease.


His chair tilted back in his suite at the Fort Worth Club, Admiral Grayson told of a dream of conquering malaria—first in the tropics, then in States of the Mississippi Valley.

“It might appear fantastic, but remember the wonders that have been accomplished—the radio, the automobile and other strides that scinece has taken.”

In Panama, the naval officer said, a base of operations has been established at Ancon. Congress has appropriated $80,000 annually for the movement to stamp out malaria and the government of Panama has given a headquarters building. Already much has been accomplished. Physicians have discovered that one type of mosquito transmits the disease from monkeys to men, a situation which medical men were not aware of.

“Yellow fever has een exterminated—why not malaria?” he said.

Cancer is another of the diseases which will claim the attention of the famous surgeon, who described the death rate above 50 as a result of the malady as appaling. 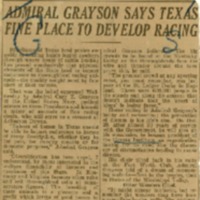