This obituary gives a brief account of Edwin Watson’s life and career as a military aide to FDR.

NOT only President Roosevelt, but the nation, lost a distinguished public servant in the death of Maj. Gen. Edwin P. Watson.

At President Roosevelt’s side thru trying years of peace and war stood Gen. Watson. He was needed there in pre-war days as aide and confidant; and the need for him there became even stronger after hostilities started.

In World War I, he commanded in combat with such success that he won the highest acclaim from his own country and the Allies. In World War II, he occupied another, but similarly vital, position beside the President. Becoming a member of the secretariat, he devoted himself chiefly to arranging the President’s daily schedule of appointments with diplomats, congressmen and others. This was a task requiring the rarest tact and understanding.

It was Gen. Watson’s privilege, in a personal and military capacity, to lighten the incalculable burdens of his chief.

Americans in this city and everywhere join the President in mourning a brilliant soldier, a diplomat and a gentleman. 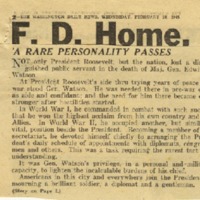