ADDITIONS: In 2017, N. Douglas Noland of Black, Noland, and Reed donated a legal file of material related to the Wilson Birthplace property. Much of the file had been assembled by Peyton Cochran, and includes some of his planning for the Birthplace opening in 1941. The file has been added to the collection as series 12.

SERIES IN COLLECTION, WITH INCLUSIVE DATES:

3 letters; from Peyton Cochran to Albert A. Doub, Armistead M. Dobie of UVA, W. H.
Dougherty; and from Albert A. Doub and Armistead Dobie to Cochran; discussion of
Gov. Wilson’s primary campaign and election in November; January 26, 1912 –
September 12, 1913

6 letters; from Peyton Cochran to Cochran to Hon. Oscar Price, Hon. H. D. Flood, Judge
Stafford G. Whittle, Col. H. M. Morrow, Governor Westmoreland Davis on Cochran’s
request for recommendations/help in getting an appointment to the Judge Advocate
General’s Department; from Judge Richard S. Ker, Judge Henry W. Holt, and Judge
George M. Harrison to the Judge Advocate General’s Department on their
recommendation of Cochran for an appointment to the JAG’s Office; from Hon. H. D.
Flood to Hon. Randolph Harrison on their efforts to get an appointment for Cochran;
May 1918
7 telegram; M. B. Robertson to Mrs. Peyton Cochran about seeing Major Cochran off from New York to France; January 23, 1919

8 letter; Peyton Cochran to Susie Cochran, writing about his getting situated aboard the
U. S. S. George Washington, and renovations in preparation for Pres. Wilson’s return trip; January 27, 1919

36 memo; discharge of enlisted men on account of dependents; October 15, 1917

37 memo; concerning inducted men who have a claim for discharge; October 18, 1917

40 memo; concerning inducted men who have a claim for discharge; November 13, 1917

42 memo; discharge of insane at cantonment base hospitals; November 22, 1917

61 memo; latest instructions regarding discharge of non-enemy aliens; May 7, 1918

63 memo; retention of aliens pending investigation of their cases; May 21, 1918

64 memo; discharge on account of minority and dependent relatives; May 23, 1918

78 memo; Decisions of Comptroller of the Treasury; September-October 1918

82 memo; permission for conscientious objectors not to wear uniforms; October 28, 1918

87 memo; structure of the Board of Review, Military Justice Division; November 6, 1918

88 memo; War Department telegram concerning compulsory military service of U. S. citizens in France, and French citizens in the U. S.; November 9, 1918

89 memo; War Department telegram cancelling inductions into the Army because of the Armistice; November 11, 1918

90 memo; War Department telegram directing that the U. S. Railroad Administration should stop enroute all inducted men not yet arrived at army mobilization camp; the President directs that they are discharged; November 11, 1918

91 memo; War Department telegram to all Governors on the classification of men who have reached their 37th birthday; November 11, 1918

92 memo; War Department telegram to all Governors concerning questionnaires sent to men who had reached their 37th birthday; November 13, 1918

93 memo; Weekly Service to the Field of Notes on Administration of Military Justice, with Cumulative Index for December, Part Two; December 1918

95 memo; transportation of alien enemies to be charged to the Department of Justice; [1918?]

116 report; “Schedule of arrangements for inspection of activities at Base Section No. 2 by party of visiting newspaper representatives” at headquarters, Base Section #2, Services of Supply, A.E.F., France; April 11, 1919

119 report; “Facts and Figures Showing the Activities of Base Section Number One,
St. Nazaire, France; [1919?]

126 report; Notes on Operations—A: The American Expeditionary Forces prior to July 15, 1918, with two maps (one small map kept with report and one large map placed in Map File Drawer), by Brig. General Fox Conner; [1919?]

141 JAG Department; opinions; “Weekly Service to the Field of Opinions of the Judge Advocate General of the Army, with Cumulative Index, together with Notes on Administration of Military Justice, Decisions of the Comptroller of the Treasury, Recent Publications and Decisions of Courts, Regulations of the Bureau of War Risk Insurance”; November 16, 1918

145 pamphlet; “Instruction for the Preparation of Army Pay Rolls”; 1917

[All of the maps listed below are stored in the Library Map File Drawer, except for a small map # 166
which is stored with the rest of the Peyton Cochran Collection in the archives box.]

159 map; Map to Illustrate the Offensive of the St. Mihiel Salient; September 1918

161 map; Map to Illustrate the Meuse-Argonne Offensive, First, Second, and Last Phases;
To Accompany Report of the Commander In Chief; November 20, 1918

168 map; Map of the New Europe with Summary of the Treaty of Peace, and Treaty Terms Given Austria; [1919]

Peyton Cochran was an attorney who lived in Staunton, Virginia, at 118 Church St., with his wife Susie Baldwin (Robertson) Cochran. Shortly after the United States entered World War I, he sought an appointment to the office of the Judge Advocate General (JAG) and received it; on July 15, 1918, at the age of 38, he reported for duty in Washington, D.C. In October of that year he was made chief of the Death and Dismissal section of the JAG office. Early in 1919 he was sent to France to work in the office of the JAG for the American Expeditionary Force. He worked in France from February 7 until July 31, 1919, when he returned to Washington, D.C. There he reported for duty on August 15 and was once again assigned as chief of the Death and Dismissal section of the JAG office, where he remained until his discharge in March of 1920. He started his military service as a Major and rose to the rank of Lt. Colonel, receiving the latter rank in September 1919. After his discharge from the Army, he returned to private law practice at his office on 1-3 Barristers Row in Staunton, Virginia.

Cochran was born on April 30, 1880, in Staunton, Virginia, and earned a bachelor’s degree from Hampden Sydney College in 1901, a master’s degree from Princeton University in 1902, and a law degree from the University of Virginia in 1904. Cochran had contact with Woodrow Wilson in both direct and indirect ways. While a student at Princeton, Cochran took at least one class from Professor Wilson. In 1912 when Wilson ran for president of the United States on the Democratic ticket, Cochran served as Wilson’s campaign manager in the Tenth Congressional District, which then included Staunton and Augusta County. Early in the year of 1912, while the upcoming election was still in the primary season, Cochran organized a group of 200 Stauntonians who took a train to hear Wilson’s speech in the state capitol of Richmond, VA—Cochran himself introduced Wilson to the large delegation. In November of 1912 after the election, Cochran had a personal visit with the President-elect. Afterwards Cochran wrote that a New York newspaper had reported that “Col. Gordon and Mr. Cochean [sic], old friends of the President had been to visit him.” Cochran had indirect contact with Wilson as the former served under his Commander-in-Chief as an officer in the U. S. Army during World War I, as described above. Cochran worked as an attorney from 1920 until 1969. He died on February 12, 1969, and was buried in Staunton, VA.

Cochran’s personal correspondence begins in 1911 and 1912 when he was establishing his law practice in Staunton. As a supporter of the Democrat Woodrow Wilson’s bid for the 1912 primary election and general election, these letters give a local perspective into national politics. The letters also document his seeking after letters of recommendation for a post in the Judge Advocate General’s (JAG) Office after World War I broke out, and then, after he received his appointment and orders to leave for France, his descriptions to his wife Susie of his overseas experience. He describes traveling on board the U. S. S. George Washington, touring various battlefields and shelled areas, the visit of the king and queen of Belgium to Gen. Pershing’s headquarters, his stay in a hospital, his impressions of a July 14 parade in France, the longing of the soldiers to return home, and other observations. His military correspondence contains letters and telegrams concerning his appointment as Major to the Judge Advocate General’s office, recommendations regarding courts-martial, his recommendation of A. G. Robertson for the JAG Office, and personal letters between officers. His personal military records contain identification cards, ration cards, a pay slip, and requests for leave of absence.

The memos section is the largest series in the collection. These originated from government offices, mostly the JAG Department, and convey information to armed forces personnel concerning military issues such as conscientious objectors, aliens in American military, court martial, war-induced mental illness, desertion, absence without leave, war risk insurance, requests for discharge based on number of dependents, and other subjects.

The reports series includes a few documents marked “Secret” and transmit information obtained from German troops, and other documents concerning battle analyses and descriptions of wartime facilities. The Judge Advocate General Department’s opinions contain many pages of condensed legal opinions on the topics mentioned above in the memos, as well as many other issues.

The pamphlets are written on such topics as Army pay roll, War Risk Insurance Act, military uniform regulations, sanitary and communicable diseases information, and others. The photograph series shows Cochran in uniform as well as military and civilian sites in Europe. Cochran obtained postcards from Europe, and these depict scenes from France, Belgium, England, and Scotland. This collection has fifteen maps detailing battles such as the St. Mihiel Offensive and the Meuse-Argonne campaign, maps of France, the Order of Battle on Armistice Day, and “New Europe.” One map—“Nouvelle Carte de France”—has hand-drawn lines and handwritten symbols and notes in English. The folder marked “miscellaneous” contains a handwritten college notebook from Cochran’ school days. 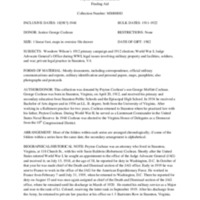