The collection is contained in 11 folders arranged chronologically with the photographs intermixed with the correspondence. There is only one item per folder.

The Earl S. Parish Collection offers a glimpse into what it was like to be stationed in Europe after World War I had officially ended. Earl S. Parish served in the Army and was stationed in Savenay, France, at Base Hospital # 100. At first eager to go and see action, he arrived in December of 1918, and was too late to experience combat; after four months he was describing his physical location as a “mudhole” and his daily routine as boring. The collection contains letters that Parish wrote to his mother and father, and letters written to him by a friend named Ruth Hubble. It also contains two photographs, one of Parish in his army uniform and one of Ms. Hubble in a Red Cross nurse’s uniform, and a French train ticket. 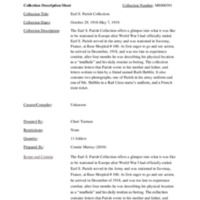