Whereas Robert E. Hicks was convicted in the United States Circuit Court for the Southern District of New York of depositing in the mails articles to produce abortion and circulars advertising same, in violation of Section 3893 of the Revised Statutes, and of conspiracy to violate said Section, and was sentenced May twenty-ninth, 1903, to imprisonment for ten months in the New York County Penitentiary and to pay a fine of one thousand dollars; and, Whereas, the said Robert E. Hicks while released on bond pending appeal, fled to Europe and was a fugitive from justice until July tenth, 1915, when he voluntarily surrendered himself into the custody of the court and entered upon the service of his sentence; and,Whereas, it has been made to appear to me that the said Robert E. Hicks is a fit object of executive clemency:Now, therefore, be it known, that I, Woodrow Wilson President of the United States of America, in consideration of the premises, divers other good and sufficient reasons me thereunto moving, do hereby commute the sentence of the said Robert E. Hicks to expire at once. In testimony whereof I have hereunto signed my name and caused the seal of the Department of Justice to be affixed.
Done at the City of Washington this fourteenth day of July, in the year of our Lord One Thousand Nine Hundred and Fifteen, and of the Independence of the United States the One Hundred and Fortieth. By the President: Acting Attorney General. 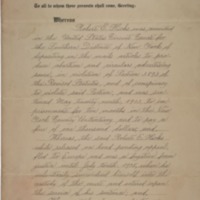