Woodrow Wilson declines Charles D. Warner's request to write a biography of Parkman for the American Men of Letters series.

You have offered me an extremely attractive piece of work in asking me to write a life of Parkman for the American Men of Letters Series, and you have in the mere offer paid me a compliment which I deeply appreciate. I think as you do of Parkman’s work and rank among historians, and it would be a veritable privilege to speak at length of so beautiful and devoted a life. It has been very hard for me to make up my mind that I could not do it.But a very little reflection has shown me that I must decline. I have work in hand to which I am every way pledged and which must take, at the least, four or five years in the doing,?besides a textbook promised which must serve as a sort of preliminary sketch and study in proportions. Practically all of my work so far,?with the exception of the little volume, I published first of all,?has been in the nature of by-products. I believe I have something better in me, and that it is high time I got it out. I owe it to myself to decline even what I should so much like to do. With warmest regards and heartiest thanks,

Most sincerely Yours, Woodrow Wilson 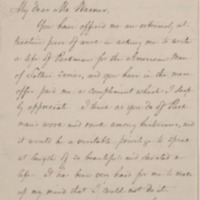