Joseph P. Tumulty is perhaps best known for his employment as the private secretary of President Woodrow Wilson from 1911 to 1921. Tumulty worked as an advisor for Wilson during his 1910 gubernational campaign while still holding the office of a state legislator until one year later when he became a permanent part of Wilson’s inner circle, working as his secretary during Wilson’s time as Governor of New Jersey. Tumulty transitioned with Wilson to the White House for his presidency. Tumulty’s position as presidential private secretary would later become the position of that we now know as White House Chief of Staff. Throughout his time with Wilson, Tumulty performed a variety of roles ranging from campaign organizer, public relations manager, and press secretary to adviser of minor presidential appointments and organizing for the Catholic and Irish vote. 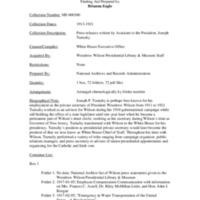